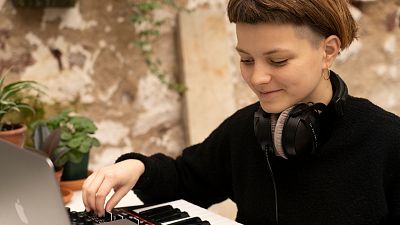 The answer is yes, while you may not think of it, performance industries are extremely polluting. From the vast amounts of energy used to power lighting and sound, to wasteful costume departments and paper flyering, even small-scale theatre productions end up generating a hefty carbon footprint. The last extensive study conducted in London was back in 2008, when the Mayor reported that the theatre industry’s carbon footprint amounted to 50,000 tonnes a year. It's going on 12 years and still, not enough work is being done to curb the impact of the stage.

Actor, sound designer and environmental campaigner Alice noticed a gap in the market. “As a sound designer, I would find myself thinking, can I even talk about climate change while using energy to produce sound?” she says, pointing out the sense of hypocrisy.

In February 2019, she decided to take things into her own hands. Staging Change is an organisation formed of a network of artists, venues and theatre shows who respond to the climate crisis together. Having run the shop on her own since it launched in February 2019, Alice now works with friend and fellow actor Josie Dale-Jones and has over 200 venues and performers on board.

It acts as a network, but it’s also a resource pool, providing tips for greener theatre production. They work with venues to get them to switch to renewable energy suppliers, propose that they record and share their carbon footprints, and make sure effective recycling bins are in operation.

“When people sign up, we have a manifesto for them to sign, talking about travel, waste and how to inspire audiences to be greener.”

When I ask if she ever encounters resistance from venues or theatre troupes, Alice admits the most common problem is travel. “Theatre groups say, well we’re going on tour internationally this year, so I guess we can’t join because of that.” In response, she adapted the manifesto to make it more flexible, so as not alienate people and not to feel as if they were preaching.

Now, Alice asks venues to adhere to three specific goals. 1) To recognise the need for urgent and collaborative action on climate change, 2) to pledge to work towards environmental sustainability in practice and 3) to celebrate the steps they make and encourage others in the field to do the same.

Where did the idea for Staging Change come from?

Seemingly unaware of her entrepreneurial flair and tenacity, Alice appears modest and unassuming in person. She explains that, growing up, her mum worked in the environmental sector, so she was always surrounded by these sorts of conversations. It was only when she grew up and realised her two passions lay in the dramatic arts and climate change, respectively, that she thought of merging the two.

“Climate change has only so recently come into the mainstream and niches have just started to open up. There are now so many opportunities to interweave other industries with environmental campaigning, just like I did.”

Later studying Geography at Oxford University, Alice focused her dissertation on ‘environmental sustainability at the Edinburgh Fringe Festival’, the largest arts festival in the world. Little did she know, this would become her first stomping ground for Staging Change.

“I had been touring shows up at the Edinburgh Fringe for the last few years and felt there was space for a performer-led campaign. That’s where it all started,” she explains.

Laying the groundwork for a #sustainablefringe

In 2018, 55,000 performances took place at the the Edinburgh Fringe Festival. There were 3,548 different shows and they took place at 317 venues. With quite a task on her hands, Alice admits “it was hard because different venues had completely different rules, but I knew someone had to lead the charge.”

Slowly, she started implementing the groundwork for Staging Change by working with shows at the festival. First, she launched a #sustainablefringe digital campaign in 2018, to try and persuade venues to substantially reduce their waste. “Waste was a good place to start, as it’s the most visible thing people can change.”

This soon evolved to setting up panels and workshops around sustainable design and helping to organise swap shops for costumes and sets. Her first panel featured talks from a theatre manager, two performers, a climate comedian and environmental economist and a Guardian theatre critic.

The carbon neutral play, powered by riding a bicycle

I ask what she feels is her biggest achievement so far, and she tells me about the ‘Staging Change Award.’

“While up in Edinburgh, we decided to collaborate with the Vaults Theatre in London, to give an award to the play making the most efforts to address climate change in a meaningful way,” Alice explains passionately. In 2019, the production they awarded it to was ‘How to Build a Rock’, a carbon-neutral comedy about how to still have hope.

What was so special about it? The eco-theatre company, Pigfoot, powered their show using only a bicycle. Throughout the production, various people would climb on the bike, swapping over to give others a break, which in turn powered all the lights.

“They even carbon offset their laptop use in meetings prior to the show!” Alice laughs.

Alice speaks highly of non-profit organisations Julie’s Bicycle and Creative Carbon Scotland, who she says have inspired her. Both put the environment at the heart of production planning and help bands, orchestras and actors tour sustainably. She also mentions an ‘eco-critic’, Julie Hudson, whose book ‘The Environment on Stage’ really encouraged her to develop and grow Staging Change from the start.

What’s next, I ask? “There’s not a lot of money in fringe theatre, we need top down investment to make sustainability a priority,” Alice maintains. “This includes societal changes too, like cheaper train tickets, to stop people driving as much and allowing them to tour in their own countries for example.”

With big things on the horizon for the young, eco-friendly theatre maker, Alice plans to work with renowned London theatres and spread her message far and wide. “We have to work together”, she concludes. “Building a network between performers, producers and venues is the only way we can radically reform the industry.”