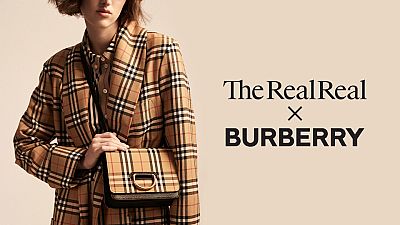 Not so long ago, Burberry was being called out in the press for burning £28 million of excess stock. Customers and stockholders alike were furious about this incredible amount of waste and it seems that the brand is beginning to listen to this criticism.

As part of an ongoing strategy to increase sustainability, Burberry has this week announced a partnership with luxury consignment marketplace, The RealReal. This collaboration, described in a press release as being intended to “support and promote the benefits of a circular economy for fashion”, hopes to encourage Burberry fans to extend the life of their much-loved designer items by selling them on.

Burberry VP for Corporate Responsibility, Pam Batty, hopes the partnership will help the brand to lead the way in reducing clothing waste. “The RealReal shares our ambition to promote the circular economy and keep clothing in use for longer,” she says, “We know that the enduring quality of Burberry pieces means their appeal and value is long-lasting”.

The RealReal states that demand for Burberry’s items has increased by 64% just last year with Millennial and Gen Z customers searching the brand most frequently. “A brand as storied as Burberry embracing the circular economy demonstrates the power of resale’s impact on both the luxury market and the planet,” explains Julie Wainwright, CEO of The RealReal, “I hope together we’ll be a part of pioneering the future in which circularity is a consideration for every luxury brand”.

There has been some doubt, however, that The RealReal’s process is as stringent as they claim. In late 2018 Chanel filed a lawsuit against the company claiming that they were “selling counterfeit CHANEL handbags” and alleged that they were deceiving customers into thinking that somehow sales were affiliated with Chanel itself. The RealReal rebutted these claims by saying that Chanel’s insistence that only “Chanel itself can know what is genuine Chanel” would mean that it was “impossible for all secondary dealers to do business”.

Reports of fakes on the consignment platform weren’t just coming from big brands potentially looking to protect their sales, however. Instagram account @Diet_Prada, famed for calling out designers stealing ideas from each other, pointed out this floral dress marked as Prada and sold on The RealReal that bore a striking resemblance to a Tibi dress with a similar silhouette.

A partnership that looks to a circular future

Partnering with Burberry would seem to be a step toward ensuring authenticity for those who want to buy genuine luxury brands without harming the planet. The certainty that these sales are backed by the luxury giant itself will hopefully encourage consumers to think about buying a pre-loved item instead of something new.

Ensuring responsible consumption by helping the items it sells to be used for longer is central to a five-year plan by Burberry that is driven by their work with the Ellen MacArthur Foundation’s Make Fashion Circular initiative. The foundation states that more than $500 billion of value is lost each year through lack of effective use or recycling with some items in the U.S. being discarded after around 7 to 10 wears.

Make Fashion Circular lead, Francois Souchet, told Euronews Living; "Creating a circular economy for fashion, where the clothes we love never become waste or pollution, is a huge opportunity for businesses. It is great to see companies like Burberry and the Real Real working together to realise those opportunities". She said that novel business models like this help to allow the fashion industry to thrive whilst also reducing waste.

Selling luxury brands anywhere other than in the designers own approved stores is always going to generate questions of authenticity. By creating assured partnerships like this and supporting innovative business models, however, the resale market can start to shed its questionable reputation.