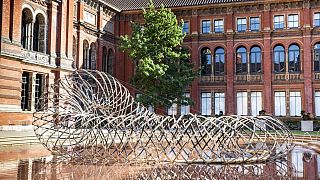 Kengo Kuma’s installation ‘Bamboo (竹) Ring: Weaving into Lightness’ seems to float atop the semicircular pool at the centre of the John Madjeski Garden as its interwoven circles spiral to form a soft, organic shape. As part of the London Design Festival’s V&A Projects, this ‘experiment in weaving’ takes material innovation and pairs it with Kuma’s world-leading design to look toward the future of urban architecture.

Sitting down with Clare Farrow, curator of the installation, on the cafe terrace overlooking Kuma’s work, we took some time to discuss the structures traditional Japanese origins.

A combination of inspiration from the architect’s past and cutting edge research by the Kengo Kuma lab at the University of Tokyo, the work has echoes of traditional Japanese building materials, Farrow explains. “He started telling me about how he had grown up in a traditional Japanese house where his school friends were living in the big concrete blocks,” she says when I ask how she began the process of curation,” To begin with he was ashamed of his little traditional house but then he started to appreciate the natural materials and the free flow of air”.

Sensory experience played an important role in Kuma’s choice to use bamboo as a base for the structure. The surrounding red brick of Aston Webb’s 1880s facade inspired Kuma to create a contrast with the natural green of the material. It was only on a site visit that the location really stood out to him; “I initially thought that Kuma-san could design something for the tapestry room,” says Farrow, “we showed him the room and he felt it was too dark and enclosed.” As they walked through the galleries surrounding the garden, Kuma pointed to the pond and said that was where he wanted to put a structure.

So, the beautiful woven structure of the installation was born as Kuma went back to Tokyo and created a delicate coiled charcoal sketch, a piece of art in itself even without the corresponding structure. Following the theme of Kuma's portfolio, the architect wanted to use bamboo, a material that connected him to his past. Bamboo, however, is a variable natural resource and what was necessary next was the material science required to make this structure work.

The Kuma Lab at Tokyo University specialises in research and design that bridges gaps between urban and natural, seeking to fill existing voids with sustainable materials to solve architectural problems. “It’s definitely looking to the future of architecture,” Farrow adds, “we’re looking to a future with urban densification where natural materials are so important for people’s sense of wellbeing. It will be important to have that connection with time and history and with nature”.

This traditional Japanese architectural choice could offer just that, a viable architectural material that brings nature into city centres. Farrow, having recently curated another exhibition that looked at new timber architecture, shares Kuma’s passion for sustainable building choices; “I think it's very exciting to take an ancient material like bamboo, which is actually a grass, that has the beauty, that has the associations, that has the resonances but what this team have done is combine it with the modern material of carbon fibre that gives it additional strength and rigidity. Bamboo is one of the materials that scientists around the world are exploring, its fast-growing, it is organic you can recycle it and of course, it has a very obvious connection to nature.”

It can be difficult to make natural, sustainable materials work in an urban environment, however. Combinations between modern and ancient materials aren’t always easy, Farrow reveals; “what they did with the bamboo in order to be able to adhere the resin and then adhere the carbon fibre they had to work on it to smooth it to remove any ridges. In a way, these modern materials are enhancing these natural sustainable materials to create a vision of the future where nature is enhanced by technology.

“You know, I think for a long time it was felt that technology was at odds with nature. Toshiki Hirano, project leader at the Kuma Lab, talked about this being a struggle with natural materials. But it is certainly a struggle that is worth it.”

Read More | 5 Stunning examples of green architecture around the world

Moving away from the confines of the modern skyscraper

It is these experimental struggles that Kuma hopes will bring a new appreciation of natural materials to the forefront of modern architecture. The freedom that this London Design Festival project has afforded him to create something from unconventional elements helps communicate this desire to change the way we think about urban environments. Kuma has spoken about the traditional cityscape of central Manhattan, the classic 20th-century skyscraper confined by its rigid straight lines.

“I think the future of architecture is more organic shapes and experimenting with flexible structures,” Farrow says, “ experimenting with how you can use the lightness of these kinds of materials to maybe build on top of buildings or fit into awkward spaces within urban environments”.

Potential is what visitors of the museum are meant to take away from many of London Design Festival’s sustainability-focused commissions. ‘Legacy’ sees designers collaborate with the leaders of London’s cultural institutions to create items that show off the potential of American red oak. In a similar way, ‘Weaving into Lightness’ hopes that attendees at the festival leave thinking about bamboo in a different way.

“Kengo Kuma has said that he hopes it will be a catalyst for weaving people and places together. This beautiful John Madjeksi Garden is such a hub in the London Design Festival.” Farrow is right, already as we sit there only half an hour after the museum has opened, people have started to gather around the sculpture and take pictures, “I think a lot of people have taken photographs of it and hopefully taken away the idea that nature can work in harmony with technology if we look after it and try to understand it.”

‘Bamboo (竹) Ring: Weaving into Lightness’ is on display at the V&A until the 22nd of September in the John Madjeski Garden. Many of the other projects commissioned by the festival can also be seen at the museum and the full program can be found here.