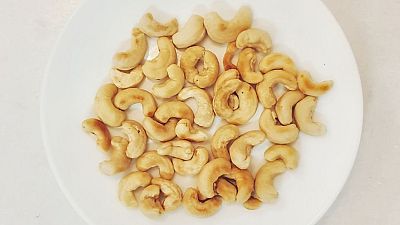 A team of scientists at the University of the Witwatersrand, Johannesburg, have developed a way to make environmentally friendly sunscreen using the shells of cashew nuts.

Conventional sunscreens have been under a lot of scrutiny recently with the U.S. Food and Drug Administration (FDA) announcing just as summer started that it would be looking to tighten regulations on such products after a study showed that some of their sun blocking chemicals were being absorbed into our blood streams. As well as potential concerns about the effects these chemicals could have on our bodies, many of them are petrochemical based and have poor biodegradability that could affect marine life, according to a press release from the University of the Witwatersrand.

Craig Downs, executive director of Haerecticus Environmental Laboratory, a non-profit researching the impact of sunscreen on marine life, told Euronews Living that ingredients like Oxybenzone and Octinoxate can cause coral bleaching but so can other naturally occurring events. What was more worrying about the effect of these ingredients for him was that the corals didn't come back.

"In the 1960s, a reef could be utterly destroyed by a hurricane or a bleaching event, and 5 years later, you couldn’t tell of any history of that destruction because the reef would jump right back. With Sunscreen pollution and other forms of chemical pollution, that is not the case – the reefs don’t jump back, but remain dead. This is the major ecological crisis" he stated.

Could Cashew shells be the eco-friendly answer?

A team at the university have, therefore, been looking into potential alternatives that could be produced in a more environmentally friendly way and may not have the same ecological impact. In collaboration with scientists in Germany, Malawi, and Tanzania they have been using cashew nut shells to produce promising potential sunscreen ingredients.

In a statement Professor Charles de Koning of the Wits School of Chemistry explained that the team of ‘green scientists’ were aiming “to find a way to produce new UV absorbers from cashew nut shells as a non-edible, biorenewable carbon resource” to help move away from chemicals that used fossil fuels for their production.

The edible cashew nut only makes up a small percentage of fruit, and is encased in a hard shell that hangs below the large red or yellow ‘apple’ that is harvested from the tree. The fruit is used in countries where cashews are grown to make juice or even fermented into alcohol in India. Usually once the edible nut has been extracted the shells are discarded but this new research could find a use for them in preventing harmful exposure to UV rays.

Chemicals found in widely available sunscreens must reflect, scatter or absorb high energy UV light in order to be effective. According to the Skin Cancer Foundation, UVA and UVB exposure damages the DNA in skin cells, increasing the chance that they won’t replicate correctly which may cause skin cancer as well as premature ageing.

The research carried out by the study’s researchers found that some of the compounds created using the cashew liquid had similar UV ray absorbing qualities to commercial sunscreen ingredients like oxybenzone. Four of the chemicals created met requirements for further research as well as being ‘emulsion-stabilizing’ which could make them easier to mix into final products.

A representative for The Cosmetic Toiletry & Perfumery Association (CTPA) when asked to comment on the research by Euronews Living, pointed out that “if these new compounds are to be used as a sunscreen, investigations into their safety to human health needs to be conducted”. The CTPA also stated that regardless of the natural, organic or synthetic origins of a chemical, the body cannot determine the source of an ingredient and this source has no bearing on the safety of that ingredient.

Further testing is required before the impact of this new potential sunscreen on both human health and the health of marine life can be determined so for now it will remain confined to the laboratory but this initial research could provide an innovative answer to blocking UV rays in the not so distant future.