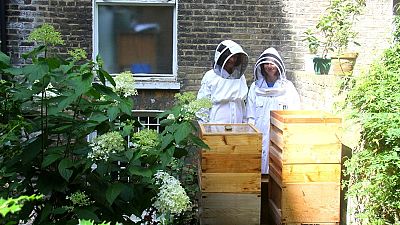 Imagine trying to tell your friends, who are 3 km away, the exact whereabouts of a good place to eat. None of those friends have smartphones, and you have to communicate by dancing and vigorously shaking your hips with everyone around you. I have just described to you the bees’ form of communication, the ‘Waggle Dance’.

A strangely comical phenomenon Sabine Leitner is used to observing as the main beekeeper at the New Acropolis School of Philosophy. “For bees, this dance is a fantastic way to inform a hundred others bees in the colony that a tasty nectar source is available and where to find it,” she explains.

It’s a warm 30 °C outside, and I am set to visit an oasis of a garden that is home to 120,000 honey bees in the heart of London - one of the 4218 currently registered hives in the city since 2014. This one is called the Melissa Bee Sanctuary and was created in 2012, originally with the sole intent of providing a safe home for urban bees.

Related |This insect influencer is saving the bees

A beekeeper’s guide to bee philosophy

Except that last year, their honey bees produced 51 kg of honey! “It was like they were paying rent,” Sabine jokes. All proceeds were invested in the maintenance of the hives, which are costly to run. Sabine’s passion for and knowledge of these crucial pollinators is profound, despite the fact she juggles beekeeping with her other jobs: leader of the UK branch of the New Acropolis Cultural Association, part-time Secondary School teacher and life coach.

“Interference with bees is contributing to their demise,” she says blaming humans who alter the hive’s activity by cutting off the Queen’s wings or cells so she can no longer fly. “We don’t let bees choose their own Queen anymore because we think we know better despite the fact that bees have known what to do for around 130 million years,” she adds. As a result, the environmental organisation Friends of the Earth has predicted that across Europe nearly 1 in 10 wild bee species face extinction.

“Bees are individuals, with some of them being lazier than others like humans really, but they all have a collective consciousness,” she describes. “I have always loved bees. I’m fascinated by the way they live together. For me it’s almost like an ideal society because bees really are individuals,” she adds.

Related |6 ways you can help save the bees from extinction

Putting on the beekeeper’s suit

Sitting next to two hives home to 120,000 bees triggered images of a massive swarm engulfing me. “Swarming is absolutely natural and is in the best interest of the bees. That’s their form of procreation, and the moment when one colony becomes two colonies. It’s harmless if they’re in a peaceful state,” explains Sabine. First the ‘Waggle Dance’, now this. There’s no rest for the bees who are always... buzzing and keeping their hive safe.

Bees bring four substances to the hive: water so it cools it down when it evaporates (just like air con), pollen, nectar and propolis, which is the sap from certain trees. Propolis is part of their immune system since it is antibacterial and antifungal and bees use it to mummify unwanted and intruding animals trying to climb into their warm home but the main use of propolis is to seal the cracks in the hive. Efficiency first.

Spending the day with honey bees wouldn’t be complete without putting on the beekeeper’s suit and taking a sneak peek into the hive. We took off the roof - there’s a glass plate with a hole in it on the top so they don’t all fly out - and admired these marvellous creatures busy creating their wax structured honeycomb. The honey sweetened wood let off a beautiful aroma into the air.

Related |Watch inside a bee hive

How to help the bees?

So now is the time to help give honey bees the tools they need to pollinate most of our fruits and vegetables. It includes “eradicating pesticides and herbicides, planting more trees such as acacia, chestnut, lime and hornbeam, giving bees a lot of a variety of flowers, moving away from monoculture farming and buying ethical honey from a local beekeeper," describes Sabine.

Surprisingly, bees - bumblebees especially - are surviving better in urban areas than in rural ones. According to the Royal Society, farming monoculture and pesticides deprive bees of food.

The more wildflowers, the better, so don’t hesitate to plant them. Furthermore, respecting honey as a special product will also help improve their welfare.

Before I left, I was asked to spin their wheel of philosophy fortune and I landed on ‘imagination’. I was then given a philosophy quote in relation to this topic in a lucky dip: “Imagination does not become great until human beings, given the courage and the strength, use it to create” - Maria Montessori. I reflected on this and wondered how we can all be creative to give back to the bees.

Health tip for a honey beekeeper: Sabine managed to avoid a cold last winter thanks to this recipe. Dilute Propolis, in alcohol, on a spoonful of honey everyday. Eating local honey prior to the hayfever period really can reduce symptoms she said.

You can visit this Bee Sanctuary as part of theOpen Garden SquaresWeekend in 2020 and see the hive in action.