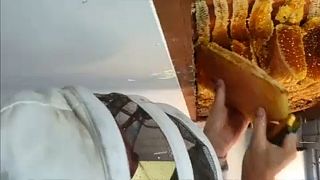 Australian beekeeper Paul Wood found a treasure trove of honeycombs inside a massive beehive hidden in a woman's home in suburban Brisbane, Australia.

Wood removed the 50kg (110.2 pounds) of honeycomb — and the 60,000 bees inside the ten-month-old hive — on August 17 at the request of the homeowner. He took the bees into what he refers to as a "free-range hive" in his backyard.

His video of the removal of the massive hive and its succulent honeycombs from the structure's ceiling went viral on social media.

Wood and his colleague gently vacuumed the bees into a special box for transportation and removed the honeycombs, straining the honey into jars.

While the bees remain in a temporary hive in Wood's backyard, he says they will eventually be sent to beekeeping enthusiasts in Brisbane.