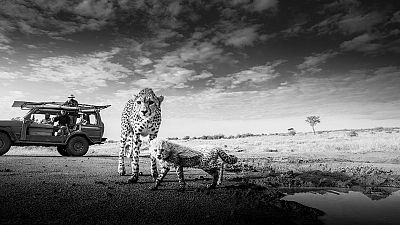 When you think of a wildlife photographer, what springs to mind? For many, the phrase conjures images of action heroes dangling from trees or crawling around in bushland at all hours of the day, willing to do anything to get that perfect shot. While some elements may be true, including the magic of capturing in the perfect light and the dedication that this can require, such a vision promotes the idea nature photography is all about the glory.

For Graeme Purdy, this simply isn’t the case. He’s spent years capturing wildlife on Africa’s plains and it’s easy to see from his shots that he’s far more interested in encouraging the viewer to empathise with the animals than he is in creating action-packed shots.

The best images, he says, are the ones in which the animals lead the way. "They create the far superior story," he tells Euronews Living.

This is particularly evident in his latest project, Eight Feet, which was created in collaboration with National Park Rescue and is a series of photographs taken from just eight feet away.

Giving the animals the respect they deserve allowed Graeme to get close enough to develop a relationship - a feeling tangible in his signature monochrome images. From the vulnerability of the adolescent lion to the likeability of the smiling hyena, it’s impossible to look at these images without feeling connected to subjects within them. And this, Graeme feels, is the key to wildlife conservation - it’s up to the human population to lead the charge. And developing a relationship with the animals in desperate need of our help is the best place to start.

From capturing the optimum shot to getting to know his subjects, Graeme spoke to Living about his work and hopes for the conservation of some of our most endangered species.

How did you get into wildlife photography?

“I was a Boy Scout and loved the outdoors. The more I enjoyed the outdoors, the more amazed I was about wildlife. I started photographing local British wildlife, making my way, eventually, to Africa. From then on I never looked back; I knew this was what I wanted to do.”

Which safari area have you most enjoyed photographing?

“The Masai Mara has to be my favourite. It is the area where I've spent the most time and when I'm there, it touches me on the inside. I've always felt at peace in 'the bush', and then when you couple that with the epic array of wildlife, the Masai Mara would be on anyone's must see locations.”

Which photograph (or series) are you most proud of? Can you tell the story of how you came to capture it and why it’s so important to you?

“My recent project, Eight Feet, is a collection of images all taken from within eight feet. It is the most ambitious project I've attempted and took 18 months to complete. The challenges were considerable and required a custom technical set up as well as re-learning bushcraft for up close encounters. It was a success in the end, but with many highs and lows along the way.”

You’ve spoken of your concern for wildlife - in what ways do you look to conserve that which you photograph?

“The recent Eight Feet collection I referred to is associated with National Park Rescue. A proportion of proceeds from the books and prints go to this amazing conservation organisation. They take over failing national parks, usually where animals are heavily poached and in some cases whole species have been eradicated. They take on the challenge to arrest this wave of destruction and once the wildlife is stable and protected, re-introduce animals back into their natural habitat.

"I have also started working with Elephant Family, another incredible organisation passionate about saving Indian elephants from extinction. I can't imagine taking wildlife images without in some way supporting and promoting the plight of wildlife.”

What role do you feel wildlife photography can play in conservation?

“Conservation is obviously a wide-ranging area but fundamentally success will only be achieved by human empathy and action. I believe the saying 'an image says a 1000 words' is true. If I didn't have my images to tell the conservation story, I wouldn't have a voice at all. The more evocative and engaging the imagery, the more empathy and action is likely. My photography gives me a seat at the table.”

Have you ever experienced/observed the effects of climate change whilst working? If so, could you please share an example?

“I guess there is a danger that we see one anecdote and it is taken out of context. Climate change is a macro topic and without a global lens on data it can be misinterpreted. In the 15 years I've been going to East Africa, it certainly feels that the once regular weather patterns are now unpredictable.

"My own personal observation is that while climate change is perhaps the single biggest concern area for some species like the polar bear, most species that are under threat are more challenged by habitat loss and global population explosion. It won't matter for some species if the rains are late or it's warmer, they won't have anywhere to live. Man is encroaching.”

I gather you like to develop a relationship with the animals you photograph - how would you define this relationship and how does it improve your work?

“I’m glad you asked this. A lot of traditional wildlife photography takes on the role of observer. I am not afraid to interact with an animal - an interaction with an animal creates a response, a behaviour. I don't believe that in itself this is negative but you must be respectful. There are many factors at play when interacting with wild animals but ultimately you must give them choices.

"If they choose to meander away or come to my camera for a sniff, I make it their choice. The only images worth taking are the ones on the animal's terms. There are times when it is not appropriate too; an animal with young require more respect and consideration. My approach is to let them decide, no surprises and with them in charge.”

Could you expand a bit on your decision to mostly develop in black and white?

“With my art I try and tell a story, so I'm making images that achieve that. I do not intend to simply document a scene, I want to be a creator and by using black and white this gives me latitude to do this. Anything black and white is by nature abstract from how we see the world, this is why I can be expressive and creative. I love the quote from the legendary American photographer, Ansel Adams: 'you don't take a photograph, you make it'.”

What’s your favourite species to photograph and why?

“My top three are leopard, leopard, leopard. When I tell this to someone who has not been on safari they ask 'Why?'. When I say this to someone who has, they reply 'I know'. Elusive and powerful as well as aloof and mysterious, leopards have the look of a film star and the personality of the coolest person on the block. Leopards have the X-factor.”

How much of your own personality influences your work?

“The objective with my images is to trigger an emotion and tell a story. I always know what I'm trying to say so this means I'm projecting myself through the image. I have a deep respect for wildlife, for some animals it's awe. I also see such beauty in wildlife and I think these things come through strongly in my work.

"So I wouldn't say my images don't necessarily reflect my own personality but they do reflect my beliefs and values associated with the animals. For the 'EIGHT FEET' book, I have a hyena image. The image should make you question this animal. It is not portrayed as a demonic scavenger but instead a strong, powerful animal that demands respect.”

What’s the most nerve wracking thing you’ve done to capture the perfect shot?

“If I was to consistently shoot from dangerous places where my life was at risk, it would make great headlines but it would either be plain stupid or disrespectful. A charging elephant, buffalo or rhino means the animal is having a 'fight' response. The animal has been put in a situation where it must react, it feels under threat enough to put itself at risk by looking for a fight. It may flatter egos but if this happens, I've got it wrong, very wrong.

"So the only time I can honestly say it was nerve wrecking was more in the 'stupid' genre. In the dead of night I decided to step outside the vehicle to observe 25 hyena eating a wildebeest. While standing there on the savannah two male lions ran past me, no more than 3 metres away, and scattered the hyena to take their kill. I can still hear the sound of the lions thudding their paws on the ground as they ran past in full attack mode.”