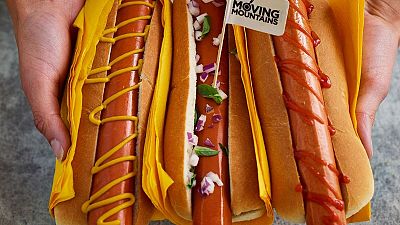 World Meat Free Week has arrived, encouraging people globally to cut their meat intake for the good of the environment, their health and the wellbeing of animals. Meat-free burgers have exploded in recent months, but plant-based foods are growing at such a pace, it's no longer just meaty patties experts have managed to recreate.

Here, we explore the newest and best plant-based products to have on your radar.

Having just arrived on UK shores from the US, Loma Linda doesn't just offer tuna alternatives. The brand also has a range of meat alternative ready meal pouches, including Pad Thai, tikka masala and a hearty stew.

UK-based startup This was created by a pair of carnivores. So it's little wonder, their meat alternatives - which include fake bacon rashers and a host of soy-based chicken alternatives- claim to fool meat lovers.

British companies feature heavily on this list, perhaps because the UK was found to be the world leader in new vegan food launches in 2018, overtaking Germany for the first time. Oggs are set to become the next innovation. The packs of aquafaba alternatives to eggs are ideal for baking according to the company, meaning cakes and brownies don't have to leave the menu for ethical eaters.

As the name suggests, this alternative to mince is made with 100% organic sunflower seeds. Its founders hope it will come to be a healthy and sustainable alternative to meat. In addition to buying the Sunflower Family mince on its own, the brand offers three meal kits in sunflower bolognese, mushroom pan and chili sin carne varieties.

A post shared by Sunflower Family Germany (@sunflowerfamilygermany) on Jun 10, 2019 at 9:04am PDT

This Germany-based brand creates a whole host of products to satisfy meaty cravings, with just plants. Amidori's veggie burgers, mince, pulled pork alternatives, as well as nuggets and fish-free sticks are all entirely soy-free, made with pea protein as well as oats, spices and potato extracts.

Made with mung beans, Just is due to launch an alternative to eggs in Europe later this year, starting with Italy. Just's bottled egg alternatives work for scrambling, baking and omelettes, as well as dishes like fried rice.

Dutch brand Vivera this week announced it had ditched meat for good, after the flying success of its plant-based range. Within the last year, the brand has unveiled vegan alternatives to bacon, hamburgers and steak to add to its range of chicken, beef and pork alternatives.

This alternative to tuna is made with a six plant protein blend, as well as algal oil and seaweed powder to imbibe it with a true taste of the sea, as well as the omega 3 normally found in oily fish. Good Catch is due to hit Europe later this year, after its debut in the US. It was developed by brothers, bloggers and cookbook authors, Derek and Chad Sarno.

The ground-breaking hotdog by Moving Mountains is made with sunflower seeds, carrot, onion and coconut oil. At almost 30cm long, the hot dog is larger than most meaty dogs, and packs a punch as a high source of protein, containing anti-oxidants, it claims.