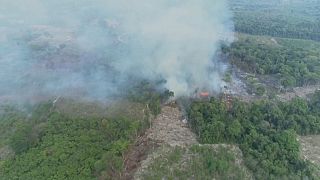 The loss of forestlands is disastrous for the indigenous Koi people of south east Asia. The Chom Penh forest provides their homes, their food and their income.

Many in this region make their living from selling resin from the trees that surround them. But their ancestral forests, in northern Cambodia and into Thailand are being destroyed by a roaring trade in illegal logging. Satellite data released by the Cambodian human rights NGO Licadho suggested that in 2013 alone, the region lost 12.4% of its forests.

Almost a third of the forest, which is part of the Beng Per Wildlife Sanctuary, has been felled since 2000, according to the organisation.

Related |The city with a million plants

Locals claim the government has been too slow to act. And one group has taken protecting the forest into their own hands.

Nicknamed the ‘vigilante grandads’, the Forest Patrol of Chom Penh aims to intercept illegal loggers in the hope of protecting the forests for generations to come.

“Living and working in the jungle is an important part of our culture. We're hoping to get support from interested organisations, such as NGOs. We think when they come here and see what's going on that they will help us make things better."

The patrol was founded by 68-year-old Ruos Lim. He and other elders, carry enough fuel, rice and salt for several days. Everything else they need comes from the forest.

While out in the woodland, home for the group is a small compound made with timber confiscated from illegal loggers. When out on patrol, they’re armed with machetes. Authorities confiscated their homemade guns two years ago.

"Most of the people cutting down the trees come from outside the area," says Lim. He believes that if the trees are gone, the Koi people’s history, language and traditions will soon follow, spelling the end for their way of life.

"We're having a lot of problems with people coming here and cutting down our trees. They cut down the resin trees too, which reduces our income. Our culture is being destroyed."

Confronting illegal loggers is a dangerous business. About 200km east of Chom Penh, three rangers were murdered in early 2018 after confiscating chainsaws from loggers.