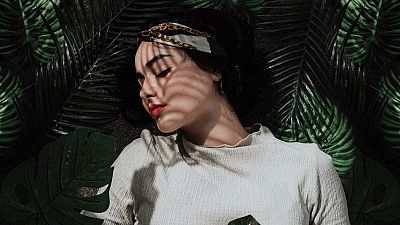 Whether you’re a night owl or a morning lark, we’ve all had problems with our sleep at some point. A stressful period at work, a few too many nights out and a change in the weather are all things that can contribute to you walking around feeling like a exhausted zombie. It can also be hard to think sustainably about something so personal and subjective. We’ve compiled some tips which will help you drift off to sleep in a way that helps both the environment and your mental wellbeing.

Unplug as soon as you can

The blue lightemitted by screens such as phones, televisions and computers can be damaging to your sleep as they inhabit the production of melatonin, the hormone which controls your internal cycle of sleeping and waking. Switching them off and resisting the temptation to check your notifications means that you’re more likely to go straight to sleep when you lay down, and also means you’ll be using less electricity to power them, helping the planet.

Although you might feel sleepy immediately after a big meal - who hasn’t dozed off on the sofa after Sunday lunch at mums? - eating a lot at night time can seriously interfere with your shut-eye. Digesting heavy food takes your body longer than a light meal, so you’ll be less likely to sleep soundly if you lay down stuffed to the gills. If you’re aiming to extend your beauty sleep think about eating a vegan or vegetarian dinner. A plant-based diet cuts the use of land used for food production by 76% and halves greenhouse gases and other pollution caused by the industry, so it isn’t just your sleep routine you’ll be helping by avoiding meat and dairy.

Pass up on the bottle

With large amounts of packaging and the significant amount of energy put into storing, refrigerating, transporting and producing your favourite tipple, alcohol’s certainly not the most environmentally friendly thing in the world. Having a nightcap also means that you’ll sleep a lot less soundly as alcohol suppresses REM sleep, which is when you do most of your dreaming. Less of this means you’re much likelier to have a restless, wakeful night - so put that glass down.

Related | How to do Ayurveda at home

Turn the heating down

Yes, we know it’s cosy to have a warm, toasty room - and it means you don’t have to bother with a jumper. But having a cooler room is both better for your sleep pattern and the environment. Having a room that’s around 15-19 degrees will help to stimulate melatonin production, which helps you fall asleep, and also means you’ll get less hot during the night as your internal temperature rises as you slumber - and no-one wants to wake up drenched in sweat. Turning the thermostat down is a great way to help reduce your environmental footprint and your heating bill.

Turning the main lights off won’t only help save the planet by reducing the amount of energy you’re using, it also lets your brain know it’s nighttime so makes it more likely you’ll drift off peacefully. Exposure to bright lights means your body think it’s daylight, so instead try burning candles or a turning on a soft lamp to light your way.

It can be more environmentally friendly to take a bath instead of a shower. If you have a power shower or like to hang out under the hot water, the amount of water down the drain can easily surpass that used for a normal-sized bathtub so save water by filling up the bath instead. A 1997 study conducted by New York Hospital-Cornell Medical Center firmly states that having a warm bath can help you drop off. Cooling off from the hot water lowers your body temperature by a couple of degrees, making deep sleep more likely - so start running those taps.

Having an established nighttime routine helps you wind down before bed. A bedtime ritual is one of the first things our parents help us with as children - bedtime story, anyone? - and brushing your teeth is an important part of that. You’ll feel better if your mouth is fresh and clean and it’s important for healthy teeth and gums. Plastic toothbrushes, however, are terrible for the planet. With more than a billion of the things ending up in landfill every year in the US alone, they take over 400 years to decompose. Consider switching to a bamboo toothbrush instead, which will break down within a mere six months.

If you’re really suffering from insomnia, you might think about trying sleeping pills. But prescribed sleeping medications are only suitable for short-term use and won’t be doing your body or the environment any good in the longer term. Try herbal supplements or sleep aids instead, such as melatonin or magnesium, both of which are natural and non-addictive.