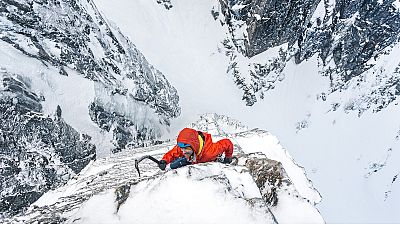 While working with the Icelandic Mountain Guides, outdoor adventure photographers and filmmakers Ulrika Larsson and Lukasz Warzecha released Meltdown, a film exploring how climate change is causing glaciers to melt in Iceland, told from the perspective of those affected the most. We spoke to them about their work, the challenges, and how photography and film can be used to communicate the message of conservation.

UL: “We are an innovative and creative photo/video production company based in the UK and Sweden. Our main focus is outdoor adventures and adventure travel, shooting and filming both commercial and editorial assignments. We believe in the power of non-fiction visual storytelling. Over the last couple of years we have also entered the world of TV and OTT media services mainly with Lukasz as the director of photography for an adventure travel series.”

LW: “I’m a stills photographer and have been shooting professionally for 10 years and that’s where I come from. Over the last five years we’ve increased to the point where half of our work is film. I work as director of photography on an American TV show called Epic Trails, an adventure travel show about hiking in some of the most amazing places on earth from Alaska to Papua New Guinea.”

How did you come to focus on outdoor and adventure filmmaking and photography?

LW: “In my late teens I became very serious about climbing. I wanted to become a sponsored climber, but then I had a climbing accident. It was a kind of pivotal moment in a way. At that time there were not many places where you could see inspiring climbing images. Soon after the accident I picked up a camera to get back to being active. I found from the very beginning that climbing photography came naturally to me. However, I realised I sucked at everything else. Being around climbers I could manage as they were on the ropes and I was doing my thing, but portraits for example, getting people comfortable for a shot, was not my forte.”

“What’s important in being successful in outdoor photography is bringing another element, being a photographer is one thing, but you need something else. What I was bringing was my climbing abilities, my understanding of the subject matter and the mindset of elite climbers, knowing where to be and at what time.”

UL: “When we met (we are not just business partners but also partners in life) I was running my own sea kayaking company and was working with a global organization focusing on adventure travel. We’ve both always been passionate about the outdoors and realized that we quite often had conversations about how we could potentially run this business together. So here we are, three years later and the company is growing stronger and stronger each year. We also have a small but extremely dedicated crew working with us.”

Have you worked in any particularly challenging environments or on projects that come to mind?

LW: “Filming a TV episode in Papua New Guinea with a small team of three in torrential rain and being on the Kokoda Track for a week, which is the hardest trail in the world especially while carrying filming equipment. And a week ago I was strapped to a 300m ice fall in Alberta, Canada.”

UL: “Our work goes beyond just snapping beautiful pictures in calm, sunny weather. Not only do you need to be skilled and creative but you also need to have sufficient knowledge and experience to be able to cope with whatever might happen when you’re out shooting in various conditions and environments. This knowledge has to stretch beyond just knowing how to look after the camera gear in -30 degrees Celsius on a winter climb in Canada for example. Being fit, both physically and mentally is key and will definitely help you improve your performance on location and in the end, the end result will probably be even better.”

LW: “The last five years I’ve spent practicing and improving my outdoor skills. I wanted to become absolutely proficient not just climbing, but also as a dive master, kayaking and skiing. I hone my skills and practice at every opportunity so when the assignment comes I can just focus on the camera and focus on capturing the moment. That runs in the studio, Ulrika was the first female to solo paddle the whole Swedish coastline and Ian Parnell, our creative director, has a really strong climbing background. I say he summited Everest as people can relate to that, but summiting Everest with a camera as a photographer is another story.”

UL: “Oh, and one more thing. It doesn’t hurt if you’re an organizational guru and a people’s person if you’re in this business either.”

UL: “Producing, filming and being the host for a TV show about paddling in West Sweden was a highlight. Also traveling to one of the most remote corners in Scotland to tell the story of a running poet and her connection with wild places was a good one too.”

Your recent film Meltdown addresses the topic of climate change from the perspective those most affected by it. Is this a subject matter that is personally important to you?

UL: “Growing up in a family heavily involved in the Scouting Organization, I learnt at a young age that caring for nature and the environment was very important and should be on everyone’s mind. With modern life comes a lot of challenges and we now have to reverse the negative affects our style of living has had on the planet’s health. I believe we can all do something to help but above all it’s the decision makers that have to change course and lead by example. At the moment there is a big focus on traveling by air. I totally understand the impact the increased air traffic has on the environment but I also think that this has sparked the airlines to look into alternative options like fossil free fuels and electric airplanes. I also believe that the manufacturing industry has a far bigger negative impact on the environment and a lot more needs to been done in that area. Despite the serious and concerning subject matter the message is largely positive in that through the right education and messages change can be made.”

LW: “We’ve been friends with the owner of Icelandic Mountain Guides, the company we worked for on this, for a very long time. They’re one of the biggest tour operators in Iceland. They’ve been very interested in telling compelling and authentic stories, and after hearing the guides talking about how things were changing we spoke to the owners and said this is a story that we should tell.”

“One of the dirtiest secrets of professional filmmaking is that we travel to all these locations, but nobody in the industry has the guts to say it. Every time an opportunity arises I’m partly filled with excitement and partly with guilt, as I know the impact on the environment. This was one of the examples; people travel to Iceland to see the glaciers and by doing so contribute to the problem. But hopefully, by seeing the changes, they can do whatever they can. Hopefully all of the small changes will contribute positively to the environment. My dream is to run a carbon neutral operation. As a studio, we’re part of 1% for the planet– a global movement inspiring businesses and individuals to support environmental solutions – it’s important for me not to just talk about it but take action. I feel where I can inspire people I can contribute a lot more.”

Do you think that those in your profession are uniquely placed to have conversations about the environment and promote conservation?

LW: “Not only uniquely placed, but that we have a huge responsibility. We need to ensure that we present a great story, not just a picture. We all deserve to go to beautiful places, but I would like to talk about having an experience and making a connection rather than just going to take a perfect picture for yourself. If that’s the only reason you travel then you’re probably missing the point.”

UL: “It has been shown throughout history that education is the right tool when it comes to change. We have a very powerful tool in our hands when we’re out shooting images and films and if we manage to tell the stories in an honest and authentic way, people will listen and hopefully think about what they can do to help improve the situation. If we can encourage our viewers to make just one small change in their lives that would be positive, then we’ve accomplished a lot with our craft.”

To see examples of LWimages work, or to find out more about the studio visit the website.