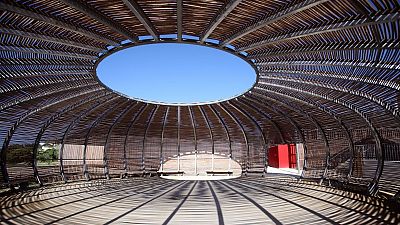 Last August, mayors of nineteen metropolis over the world – including Paris, New York, Los Angeles and Tokyo – committed to only build zero-emission buildings starting 2030. A few months before, in January 2018, French architect Philippe Madec published alongside his colleagues Dominique Gauzin Müller and Alain Bornarel, a “Manifesto for happy frugality” in the building industry. Now signed by over 5 000 people, the Manifesto raises awareness of the construction industry responsibility in global warming, as buildings produce 40 % of greenhouse gas emissions over the world. “It’s 20 % more if we take into account the motorized transport induced by our conception of town planning”, says Philippe Madec as we sit down for a one-on-one interview in his Paris office.

In your manifesto, you call for the end of “concrete monoculture”. What does it mean?

“In the nineteenth century, architecture reinvented itself thanks to steel and, in the twentieth century, through concrete. This is how it went, basically. What I call “concrete monoculture” is the fact that, today, architects don’t even ask themselves which material they’re going to build with. The answer is always concrete.”

“As any other material, concrete’s specific use is coherent: it is very useful for water and physical resistance, for example. But its systematic use, to build anything and everything, is a disaster, especially as resources needed to produce concrete, such as underwater sand, are considerable. I’m convinced that in the twenty-first century, architecture will reinvent itself through bio-sourced and geo-sourced materials, such as hemp or earth, for example.”

How can “happy frugality” make a difference?

“Frugality is not the same as sobriety. The word comes from the Latin frux, fructis, which means “fruit”: so, “frugality” means the good harvest of earth’s fruits. Today, the question really is how to use earth resources: how to reap the harvest that does not damage the earth and allows us to live at the same time.”

“Happy frugality” is quite close to the “Factor 4” notion, used by the IPCC (Intergovernmental Panel on Climate Change) to refer to the need to produce twice as much well-being with half as much resources. There is no other equation than this one: it is the condition of our future. The good news is that every single one of us can do something about it, on a day-to-day basis. A great part of “happy frugality” success comes from its accessibility to all.”

Bioclimatic architecture is one of “happy frugality” practical applications. Can you tell us how it works?

“Today, we are able to build passive houses that consume thirteen times less energy a year than regular buildings. This kind of houses and buildings is designed so that it is able to use all free natural resources from its environment: this is what “bioclimatic” means. We make sure to orient it towards the sun, to protect it from cold winds, and to insulate it well so that all energy that comes from the environment stays inside the house.”

“We know how to do it, we know it’s very efficient and we know it doesn’t cost more money; there are numerous examples of passive houses around the world – in Brussels, in Austria, etc. – but we are slow to generalize this type of constructions. It’s all the more unfortunate that energy and peace are interdependent. Most of contemporary wars are and will be linked with control of natural resources: gas, oil, charcoal and water. If we decided to use less energy, we’d be less dependent upon energy suppliers – which means we would no longer legitimate the numerous wars caused by energy.”

Why is the building industry so slow to change its habits?

“Because we didn’t mourn over modernism. After World War II, Europe reconstruction was the triggering factor of a flourishing economy. The western and capitalistic model which started the 30-year post-war boom is still the reference model today, the one that prevails in the continents that are beginning to grow now. If Africa, whose demographic and economic growth will explode in the next 50 years, adopts this very same model, we’ll be heading for serious problems. If it doesn’t, I think we’ll be able to cope with global warming.”

You won the Global Award for Sustainable Architecture in 2012, can you talk to us about it?

“This award is one of the reasons why I’m still optimistic about the future. The prize became so important that the last three or four Pritzker laureates – the most important architecture award in the world – are ex-Global Award laureates. It means that even the Pritzker, which used to reward architects for their big gestures, symbols of power and force, has realized that the future of architecture will lie on commitment toward society and life, rather than plastic expression.”

How do you see the future of our planet?

“I believe in the key role of civil society. Unless a miracle happens, I don’t think our political world will be able to change in 6 months or a year. Change will come from the field, from the people: a thousand examples show us that we can do things differently!”

“I’m not a dreamer: I know things won’t change in one go. When a cargo ship approaches the coasts, it turns off its engines a hundred kilometers offshore, because of its unbelievable force of inertia. Just like those supertankers, I know our societies will take some time to stop and to change their economic model, but I’m optimistic.”

“I’m an associate professor since 1986 and I’m sincerely amazed by the new generation. People between 18 and 25 years old now are astonishing by their capacity to be generous and in the sharing. They don’t grant the same importance to possession as we used to do: they share apartments, cars, upcycle clothes, etc. I know change will come from this young generation!”

Russian Dachas: How the humble summer cottage became an institution