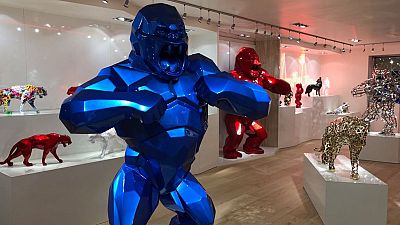 From the latest French Grand Prix to the slopes of the Alps, the work of internationally renowned French artist Richard Orlinski is shown off around the world to reach people far and wide.

If you see a red gorilla or a five-metre-tall bear, he might just have been there.

He is known as the best-selling French contemporary artist in the world and he had his latest “exhibition” marking Formula 1’s return to France after a 10-year absence.

As well as seven eye-catching sculptures, Orlinski created the trophy for the event — a gorilla in the colours of the French flag, holding a tyre above its head.

When I called the artist, I had planned only to ask him questions about the F1 and his gorilla sculptures and trophy. But the interview that followed covered everything from humanity to contemporary art and even the décor of Lewis Hamilton’s living room.

'King Kong' invaded Paul Ricard circuit in Castellet, France and you are behind it.

Yes, we invaded the place. The whole story started with the Managing Director of Formula-1 Sean Bratches, who wanted to renew the image of the race. Being a friend of the President of the Grand Prix France, Christian Estrosi, I was especially happy to get involved.

We displayed some emblematic sculptures of mine to create emotion and stimulate the senses beyond the experience of watching the race cars.

Among others, we displayed the panther, the horse, the bear, the ‘King Kong’ and the pair of jeans as well. To explain this last one, I have to add that I am working on all sorts of iconic things and everyday objects that are deeply rooted in our lives; things I can bond with. It can be a motorbike; it can be a stiletto heel. I do not set any limit for my creations. The jeans, for example, carry a sort of openness, they embody a kind of liberty — this is how I interpret them.

What do the famous race and your art — especially the wild animal sculptures — have in common that led to this idea coming to fruition?

Art is everywhere, art is everything — Formula-1 is art, sport is art.

There is a wider message, though, that I would like to send via these animals. We like them because we think we are superior to them, and human beings like to be superior to something. These animals, however, can be huge, wild and powerful. They follow the rules of nature — they can kill, yet they do that only for survival. We are the ones who kill for nothing and follow no rules.

This particular message has nothing to do with Formula-1, but I would like to export it across the world.

The trophy itself was also your artwork. Tricolour ‘King Kongs’ were awarded to the three winners. What did Lewis Hamilton have to say about the unusual design?

We met in Barcelona before. He bought some of my artworks to decorate his house, and actually, I saw this picture he posted on Instagram showing him playing a video game and the art pieces were in front of the TV. We were laughing later when I told him this, he is like a nice kid.

We met on the French Grand Prix again, but I was already on a helicopter leaving the circuit when he called over to me, saying, “You forgot to sign my trophy.” So we agreed that we have to meet again and my first thing to do will be to sign his trophy then.

You only started working as a professional artist in your late 30s but it was already a part of your childhood. How did you achieve this transition?

I was four years old when I first started, but I stopped when I was 10 to 11. You know, when you tell the girls at that age that you do animal sculptures, they laugh at you. It is not that glamorous. So I stopped that and I was making music, and turned to be more like rock and roll.

In my 20s I started creating and working on my art again, although it was purely a hobby. One day, I realised I was not that happy to live my life the way I was; it was going in the wrong direction. I was living very well with a big car and big house, but I was tired and not happy.

So I stopped everything and started sculpting as a profession. That is what you call a leap of faith — I was not sure that it would work out so well. It is a profession in which it is very hard to succeed. I was lucky and I have been working very hard, even nowadays, I work 16 to 18 hours a day to make all my projects happen.

One of your recent projects has nothing to do with sculptures — you designed a special edition Porsche. Can you tell us about that?

Yes, I made that for the 55th anniversary of the Porsche 911. It is going to be auctioned in Monaco on July 19 and all profits will go to charity.

In all my life I have been involved with a lot of charities. Today, I support more than 20 associations. The causes can involve anybody from disadvantaged women to cancer patients. In this particular case, the full profit from selling the Porsche 911 by Orlinski will be donated to an association called Les Rois du Monde, which works to help poor and sick kids.

We work on a lot of projects like this. For example, I created a 4-metre tall panda to give to disadvantaged kids in Necker children's hospital in central Paris. They were very happy about it! I often go to visit kids in hospitals and create workshops for them so they can create art too. And at the end of the day, I am always convinced that they just gave me much more than I gave them.

What has inspired you most recently for your next creation?

It is hard to answer, I have a million things on my mind, things I could do or create something out of. But if I have to pick one now, I would say the French Grand Prix made me think that I might create a real art car one day. Something made from scratch. Something different from all the cars we currently know.

You are well-known for displaying your designs at unusual sites, such as the slopes of the French Alps or the streets of Cannes. What is your next move?

I like to put art where nobody expects it to appear. I like to surprise people. One day maybe I will exhibit on the Moon! (laughs).

My next thing, for now, is to share my art with the people of Lens and their region — Lens is a former mining region in Northern France.

These people spent their lives dedicated to the hard work of mining coal. After closing the last mine in the 80s, they were almost forgotten. However, during the Second World War, there would have been no electricity, no heat if it was not for them.

When I visited them once, I experienced so much kindness, received so much love, so I was very happy to do something with them and for them. So I decided to put the spotlight on this area and the amazing people there, by creating a cultural safari. I created special artworks for them and I place these along with my wild animal sculptures around meaningful places. They will be accessible for everybody for three months this summer.

I particularly love these projects when I can share my art with people and help them at the same time. And I like to meet and spend my time with these righteous people.