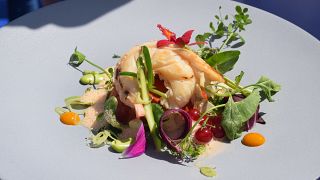 La Cote D'Azur is a global reference for luxurious tourism and beautiful landscapes. The French Riviera is replete with beautiful Mediterranean villages, a reputation that's turned the region into one of the most visited in the world.

In the heart of the Riviera, just fifteen minutes away from Cannes, and eight kilometres from Grasse — France's city of perfumes — stands charming Mougins, a village in a privileged location between the sea and the mountains. The Mediterranean town is famous for being the city of choice of many celebrities and famous artists, Picasso among them.

Adored by the stars, Mougins has transformed into a capital of gastronomy and the art of living, and consequently, into the home of prestigious establishments that offer ultimate refinement and serenity to a demanding clientele.

It should not come as a surprise that Mougins was selected as the base for Les Etoiles de Mougins, an international festival of gastronomy and lifestyle launched in 2006, in tribute to France's culinary figure Roger Vergé.

Les Etoiles de Mougins has become a reference in the world of Gastronomy, and for a few days in spring, it welcomes the world's greatest chefs and food aficionados.

More than 120 chefs took over the 13th edition of Les Etoiles de Mougins to pay tribute to the art of cuisine, turning the village of Mougins into an outdoor platform for the most exquisite tastings.

The festival offers people who would never have the opportunity to push the doors of prestigious establishments, the chance to rub shoulders with the world's greatest chefs.

Many activities take place during the 'gourmand' weekend. Picture a cuisine atelier by the world's greatest chef with detailed descriptions of colour, or a guided visit to a Provencal market by a Michelin star cook. Throughout the journey is the sound of delight to the senses as you hear 'oh-la-la' , 'magnifique', 'formidable', and 'excellent'.

For the general public, the festival is an exciting opportunity to enter into the cosmos of the great purists in the universe of cuisine, in the beautiful atmosphere of a Mediterranean town. And for the cooks, Les Etoiles de Mougins is yet another occasion to combine forces, innovate and worship the great art of eating.

If there is one big lesson after a few days in Mougins, the most important would be: In France, it all starts with food.

These beautiful floating homes are actually made of cardboard