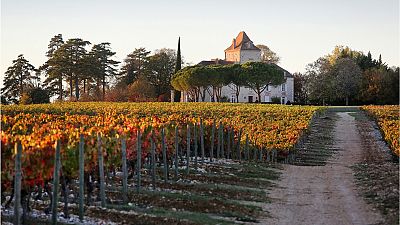 "I know which parts are good and which parts aren’t simply by looking at the colour of the leaves,” explains Bertrand Vigouroux as we stand in front of the Château de Haute-Serre vineyard in the Lot valley, southwest France. The edges of the domain appear dark green in the afternoon sunlight whilst the heart is yellow gold and vibrant orange. The phenomenon results from the high-density planting technique Vigouroux chooses for these Malbec vines.

The gorgeous nuances of the landscape makes it hard to believe these lands were left derelict for a century. In the 1870’s, a pest called Phylloxera destroyed all the vines, thus closing down every winemaking businesses in the region. Malbec, grown here since Roman times and served for centuries at dinner parties in the nearby town of Cahors, almost disappeared. Then in 1971, Georges Vigouroux, the current owner’s father, began replanting and managed to save this particular grape variety. Today, it is found worlwide, mainly Argentina (in Mendoza, since the introduction of the grape by French agronomist Michel Pouget in 1868).

“On the top of the hill over there, that’s where the Wow comes from”, says Bertrand Vigouroux pointing out to the most orange part of the domain. Malbec Icône Wow is the flagship of his brand, of which he produces 3000 bottles per year. A delicacy served at Table de Haute-Serre, a gourmet restaurant, cellar and winery, led by chef Allan Duplouich, and located at the entrance of the estate. Standing tall, the glass and stone ultra modern structure is quite unexpected and could easily be mistaken for a trendy cocktail bar in Soho or Saint Germain des Près.

“We welcome many business travellers interested by our regions’ delicacies such as Malbec of course but also our black truffles and saffron spice production” explains Christine Vigouroux, Bertrand’s wife. Indeed, 10 km south Château de Haute-Serre is Lalbenque: a town holding the “Site Remarquable du Goût” (Site of Exceptional Gastronomy) national label since 1994 for being a historical stronghold of French black truffle.

Located along one the most important roads of the Middle Ages linking Paris to Montpellier harbour (the door to the Mediterranean sea) the city of Cahors used to be an important commercial hub. Remains of four hundred pointed arches also called “shopping arcades”, flagging the entrance of where shops used to be, are scattered throughout the city. The open-air market, held every Wednesday and Saturday, has provided locals with fresh fruit and vegetables since the 14th century.

Besides being one of the wealthiest and busiest economic hub of the southwest in medieval times, the city was also a political and religious centre. One of the buildings left standing is Château de Mercuès, the summer residence of Cahors’ bishops located 20 kilometres outside the city. Now turned into a refined 4 stars Relais & Châteaux by its current owners: the Vigouroux family who acquired it in 1983.

The family worked with the architect Axel Letellier to restore the 24 rooms (including 6 suites) into original styles such as Renaissance, Louis XV, Louis XVI, Empire, Art Deco… and turn the place into a cosy weekend getaway. Le Duèze restaurant, led by French Chef Julien Poisot, recently gained its first Michelin star and serves wines from the Château.

Indeed, it also possesses its own vineyard and a uniquly design winery - one of the first in France - located 12 metres below the castle’s garden in order to protect the historical foundations. Rows and rows of barrels are kept at the same temperature all year round beneath a ceiling of rough concrete arches. This place is also opened to guests who can enjoy different types of tours and degustations upon request.

Must-see: a natural wonder and an artists’ summer residence

Overlooking a cliff with the Lot river running below, Saint-Cirq La Popie offers a scenic view over the Parc National des Causses du Quercy and is a must-see in the area. This charming medieval town dating back 13th century is considered one of the most beautiful villages in the country and seduced Man Ray, André Breton and many artists who still come today to get inspiration. The barrels containing the precious Cahors wine were made here until the 19th century and many woodturners' workshops are still standing.

Closeby, Pech Merle neolithic caves give us a peek into our prehistoric past through well-preserved mural paintings. The lack of oxygen under the ground can make this visit quite physical for some (you get out of breath almost immediately) but it should not stop you from visiting given how extraordinary (and mysterious) these paintings are. The way the caves were discovered is a very charming story I won’t spoil.