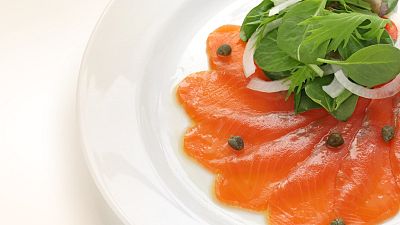 A pink dough that looks like and tastes like smoked salmon, but it is entirely plant-based. This vegan salmon project has just been launched by a startup in Bordeaux, in France, and its main ingredient is a microalga, reported France Info.

"We find it in different forms in the food chain in the oceans and it arrives on our plates in the form of fish. It has all the molecules that are beneficial to humans and we can use it like salmon, shellfish, and St Jacques scallops," said biologist Pierre Calleja.

The pink slices all come from the same microalgae, called Odontella aurita. Today, it is the only one of its kind authorized for human consumption. Rich in iodine, omega-3, amino acids and proteins, this organism is ubiquitous in the oceans. The microalgae is grown near the island of Oléron (Charente-Maritime) in large basins. It takes 15 days to produce a kilo and three hours to turn it into the finished product. A salmon is typically bred for five years before it ends up on our plates.

The startup has been working for two years on refining the small green algae. After 220 prototypes, production has entered the industrial phase. A well-kept and patented secret; Japanese companies are already interested in this vegetable smoked salmon. The startup is now working with a caterer to create its appetizers. The stakes are high: with 40,000 tons per year, France is the largest consumer country of smoked salmon in the world. This vegetable salmon could find its niche. It will be marketed in the coming days and will be priced between 60 and 65 euros per kilo.