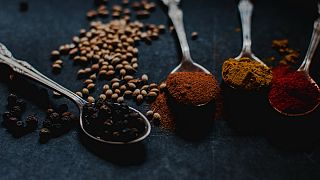 Their rich scents and flavours and their vivid colours are a delight for the senses, but spices and herbs have other hidden powers. As suggested by a growing body of scientific literature on the subject, these natural ingredients are generating a lot of interest due to the health benefits they seem to offer.

The recognition that spices and herbs can do good for human health is not a groundbreaking discovery: they have had a long history of use in traditional healing. However, it’s only recently that scientists have started to look more closely at their properties. This has led to the use of spices and herbs for therapeutic purposes becoming gradually more evidence-based. In parallel, this interest for the natural compounds has found a renewed echo in the news and all over social media.

“Spices and herbs have been used as medicine for thousands of years. We are just becoming more aware of what we are doing. Since we feel we are losing control of what’s going on in the world, we feel the need to revert back to more traditional ways of doing things, which makes this resurgence appear to be a trend,” says Carolina Brooks, a naturopath based in the UK.

Spices and herbs could help improve the health status of a person through different mechanisms. Most spices are known to contain high levels of micronutrients known as polyphenols, which are highly antioxydant, and thus seem to be good for anti-inflammatory conditions.

“Each herb and each spice possesses active ingredients that you don’t find elsewhere and therefore have unique medicinal properties. Antioxydant properties of spices like turmeric and ginger are good for treating arthritis and joint pains, but others like cinnamon appear to be good for glucose control, and so could be helpful in the management of diabetes,” Dr Sarah Brewer, an expert in nutritional medicine, points out.

Spices to use to beat cold and flu this winter

In winter time, selecting the right natural compounds may also provide extra help to fight off cold and flu. Ginger for example has been used since Ancient Egyptian times. It contains essential oils such as zingiberene, gingerols and shogaols, which can help with digestive problems, but also with the little health troubles linked to the cold weather.

“These oils give ginger its pungent, spicy heat. It’s a great spice to expectorate mucus if there is a cough. Ginger also has antimicrobial properties, which are good for any sort of infection, including winter colds” Brooks explains.

Likewise, an herb like coriander can also be interesting due to its antimicrobial, antifungal and anti-convulsant activity, which help the body resist better against infections or support it in getting rid of coughs or digestive complaints.

The proven health benefits of Turmeric

All these multiple properties of different spices and herbs are currently being studied by researchers, to understand exactly their mechanisms of action on the body. The difficulty lies not in proving whether herbs and spices have health benefits and medical properties, as this much seems certain. The challenge is rather about defining exactly the nature of these benefits, as well as developing methods to expose them in scientific ways.

Turmeric, a plant of the ginger family and native to south-east Asia, is perhaps the one that’s currently receiving the most attention. The yellow pigment curcumin is its main active compound and it has been used for centuries in traditional medicine.

Recently, many studies have been conducted to find out how exactly turmeric can help. Some clinical trials have shown that it can modulate the immune system and fight off oxidative stress. Additionally, lab studies on cancer cells have shown that curcumin may have anticancer properties, as the compound appeared to kill cancer cells and prevent their growth.

However, large clinical trials in humans are still lacking. They will have to take place before we can conclude on whether curcumin has any potential as a cancer treatment.

“Research shows that turmeric work through about 20 pathways in the cells, but there’s still a lot we don’t know. There is contradicting evidence in the scientific literature about its effects, and that of other spices. This is because studies are not always well designed. Some studies may have 20 participants which is not enough, or they use products not made from good manufacturing practices and therefore cannot guarantee what’s in them or the doses. Some trials only last for about four weeks, which might be enough to show a result”, Brewer says.

As people’s interest for using spices and herbs for health purposes continues to grow, rigorous quality research is needed now more than ever. These natural compounds cannot replace drugs in the case of serious conditions, but there is a lot to be gained from looking more closely at the role they can play in promoting wellbeing, as part of a healthy diet.

Recipes: spices and Herbs homemade remedies to improve your health

Carolina Brooks recommends a number of recipes using spices and herbs to promote health during the long winter months, and help prevent all the little infections and colds that come with it.

Add to a saucepan and simmer on a very low heat for 20m.

Strain and drink – good at night time to help with digestion, sore throats and other winter illnesses.

A handful dried or fresh rosemary, coriander or thyme

Fill the jar with herbs, cover with vinegar and add honey

You will need a 1l kilner jar.

· After 3-4 weeks, strain the herbs out and rebottle the liquid and add honey to taste.

· You can reuse the herbs to make more or make again with new ones.

· Keep in the fridge or in a cool cupboard.

Take 1 tsp a day through winter or more frequently if you feel an illness coming on.

· Add seeds in the pan and toast for 1-2 minutes until mustard seeds pop.

· Bring to the boil and simmer, for at least 90 minutes until the kitchari has a porridge-like consistency.

· Spoon into a bowl, serve warm and add fresh chopped coriander with lime and ginger pickle.