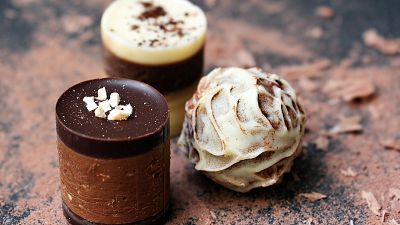 The travelling trade fair of the international chocolate industry has once again visited Lyon with all the luxury and indulgence that can be expected. It’s a place where artisans welcome you with a broad smile, a tempting taster and a promise about the cocoa content of their products.

This was the 7th edition of the annual event that gathers big brands and small family businesses under the roof of the “Salon du Chocolat” in Lyon to present everything from “pain d’epices”, nougat, handmade confectionery, regional specialities, and unique chocolate products tinted with oils of fruit, flowers and olives.

Living it went there to bring you some of the top moments from the exhibits. 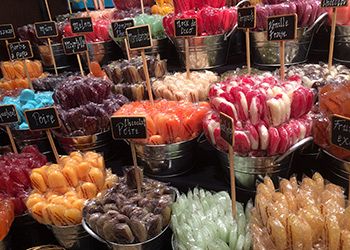 An almost hundred-year-old business from the village Val-André in Bretagne made it to the fair this year, representing the only handmade lollipops in France. Les Sucettes du Val-André has preserved the traditional and unique recipe since 1928. The colourful bouquet of lollipops stopped people in their tracks at the fair: chocolate with pear, walnut with cocoa and salted caramel are just some of the 50 natural flavours produced by this artisanal lollipop manufacturer. They even offer personalised flavours but their speciality is all sorts of salted butter caramel creams.

While strolling towards some of the exhibits from the big names in the industry Living it happened to pass by a pastry class being given by L’Atelier des Sens and overheard a secret for melting chocolate: set the heat to exactly 75 degrees, then cool it down (usually by using ice) and then gently reheat it. “That is the secret to keeping it shiny,” revealed the pastry chef.

Philippe Bernachon was born to be a chef. One of his grandfathers was Maurice Bernachon, who lay the foundations for chocolate artisans Bernachon house in 1953. His other grandfather is Paul Bocuse. 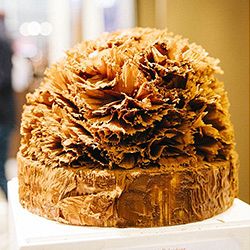 Philippe Bernachon is loyal to the high family standards. At the Salon du Chocolat its pavilion welcomed visitors with a flagship product made with real gold, the Palets d’Or. To get that special ‘Bernachon’ taste their chocolate is made of a special mix of 10 different cocoa beans from around the world. The more than a 60-year-old company is also the creator of a cake, known simply as “The President”. The original was made in 1975, when Paul Bocuse received the Legion of Honour from the French President. Together Bocuse and Bernachon House had wanted to create something original for the occasion at the l’Elysée Palace.

Every year creators compete for the best dress creation made of actual chocolate. Take a look at this years’ selection:

Established in 2003, Dolci Express is quite young compared to many century-old businesses at the fair, but it still attracted a huge crowd, mainly due to the exclusive shapes and forms of their products. The inspiration seems to come from everywhere: from high-heels and Disney princesses in milk and white chocolate to iPhone cases, Formula 1 cars and Gucci bags. One of the corners that attracted the most attention was the “Ferri vecchi”, in other words, “Old irons”: rusty tools made of chocolate. 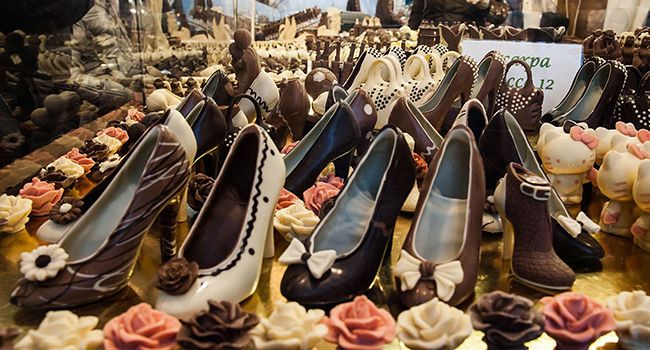 Following in the family footsteps 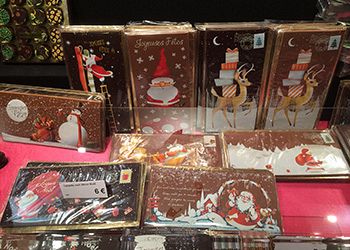 A little further on, a display of greeting cards caught the eye – all made of chocolate. These were the creations of a traditional family business with a more than hundred-year-old history. The chocolate factory called De Marlieu was established in 1906 at the foot of the Chartreuse Mountains, the current owner was proud to show off the photo of his great-grandfather, which accompanies him every year to this fair. 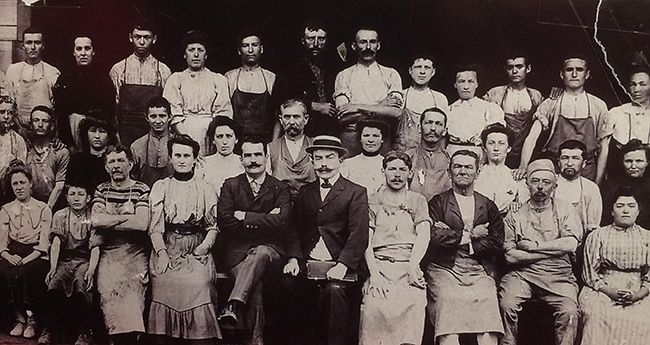 Pierre de Parscau’s great-grandfather took over a farm in a small hamlet called Marlieu to produce chocolate, and to this day his descendants produce the very same product. Today, even the style of the old boxes reminds true to the original. Pierre now works with 15 employees, some of the members of the same family which started the business back in 1906. He hopes to pass the reigns to one of his six children one day, he explained, while placing the family photo back on the shelf where serves as a reminder of the long history of the chocolatier in France.