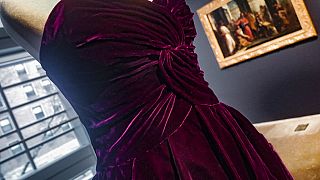 One of Princess Diana's favourite dresses is going up for auction at Sotheby's on 27 January and is expected to fetch between €73,000 and €110,000.

The purple velvet dress was designed by Victor Edelstein and was famously worn by Diana in her 1997 Vanity Fair photo shoot.

"Princess Diana has famously been photographed in professional portraits twice in this dress," explained Cynthia Houlton, Sotheby's Global Head of Fashion and Accessories. "So that makes it special. The other reason that makes it really special is Victor Edelstein was Princess Diana's designer for ten years. So obviously, he designed a lot of dresses for her. But this specific dress was also one of her favourites."

The dress is part of Sotheby's "The One" auction. Other items include an invite to President JFK's famous birthday party where Marilyn Monroe sang to the president.

Another item up for grabs is basketball superstar Lebron James' jersey from the 2013 NBA finals.

Watch the video above for more footage.