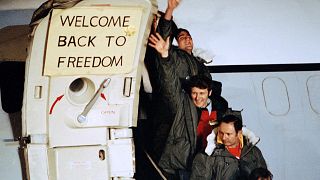 After centuries of Britain, Russia and then the US playing territorial games with the Middle East for their own gain, the Western stranglehold on the region’s politics was faltering. In few places was that clearer than Iran in the late 70s.

Attempting to retain control over Iran’s oil, the West had put their political might behind the dictatorial Shah regime since the Second World War. Dissent grew and bubbled over in 1978 with the Iranian Revolution, led by Ayatollah Khomeini.

In 1979, the Shah was taken ill and admitted to a hospital in New York. The revolutionaries, already rife with anti-US sentiment, started fearing for a US-backed coup to replace the Shah as the head of Iran.

Revolutionaries stormed the US embassy in Tehran. 66 hostages were taken, including military personnel, civil servants and students. Three hostages, a woman and two Black Americans were released as the hostage takers declared their solidarity with “oppressed minorities” and “the special place for women in Islam”.

For the 63 other hostages, it was the beginning of an ordeal that would last for 444 days. Many of them endured torture.

Outside of the hostages, six other diplomats managed to escape to a Canadian diplomat’s home. From there, the six were smuggled out of the country with Canadian passports, pretending to be a film crew for a fictional movie. This would go on to inspire the Oscar-winning film Argo, directed by Ben Affleck

The US made two rescue attempts to the hostages but neither worked and over time a selection of the hostages were released. It took until the signing of the Algiers Accords on 19 January 1981 for Iran to agree to the release of the 52 remaining hostages. As per the agreement, the US reduced its interventions in Iran’s politics, and 52 Americans returned home on this day in 1981.

During the crisis, news channels gave daily updates on how long the hostages had been held, and patriotism in the US soared. Since, it has inspired over 80 songs, multiple films, and even a mission in a Call of Duty game.

Just one year after the hostages were released from Iran, the world would be shook again.

He’d recently been kicked out of the band Black Sabbath for his drug use, but his solo career was off to a flying start.

Then, at a concert in Iowa, a bat was thrown on stage. Osbourne claims he thought it was rubber at the time, realising his mistake upon biting.

“Immediately, though, something felt wrong. Very wrong. For a start, my mouth was instantly full of this warm, gloopy liquid, with the worst aftertaste you could ever imagine. I could feel it staining my teeth and running down my chin,” he said.

Supposedly, in an executive meeting earlier in LA, Ozzy had brought two doves in with him and bitten their heads off. So whether you believe him or not, today was the day of the infamous bat-bite.