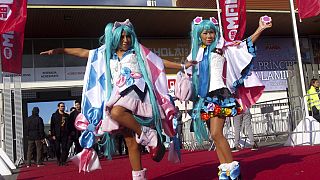 It's the latest figure to point to growing evidence that manga and anime are becoming more popular in Spain every year. In Japan, 40% of all publications are manga, and, in 2020, Japan's manga market value hit a new record of €4.2 billion (612.6 billion yen).

In Spain, due to the lack of availability of figures on prints and sales, since publishers do not provide them, industry analysts such as Guía del Cómic, use the number of new releases launched on the national market to provide an x-ray of the scene.

As seen in the chart above, the number of new releases is directly proportional to economic cycles. Between 2003 and 2007 there was a significant increase, but the bubble burst with the financial crisis and was followed by six years of collapse until 2015, when it managed to come back.

In 2020 there was uncertainty due to the pandemic but, in 2021, publishers responded with a record number of publications (1033) and in 2022 more than 1,500 new releases were recorded, according to Listado Manga.

The online platform, The Conversation, suggest that this sharp recovery could respond to consumption patterns during the pandemic: “Many confined youth who spent their time watching anime series on digital platforms discovered new titles, which encouraged them to read the original manga. Although most anime are based on the most popular manga, they only adapt part of the story in one or two seasons, so then the fan wants to read the whole story.”

In terms of publishers, Spain’s market is dominated by the Big 3: Planeta, Norma and Ivrea. Currently, these three account for 60% of all new releases, but medium and small sized publishers have been increasing in weight. In 2012, almost 90% of new releases were in the hands of the Big 3. However, in 2022, there were 29 editorials publishing manga, according to Guía del Cómic.

Some of Planeta’s most well known and successful comics include Naruto, One Piece, My Hero Academia and Dragon Ball, which is particularly popular in Catalonia due to the fact that it was translated into the local language.

Kenny Ruiz, one of the few Spaniards to have ever penetrated into the Japanese manga market and who has just published his new book, Team Phoenix, thinks the reason manga has such a huge following is due to its subject matter.

“I think the real potential of manga comes from the fact that it talks about the power of emotions, as opposed to the actions or the quality of history”. Kenny explains that “emotions are universal. It doesn’t matter who you are or where you’re from, everybody feels love, hate, and fear”.

Why is home entertainment booming in Europe?