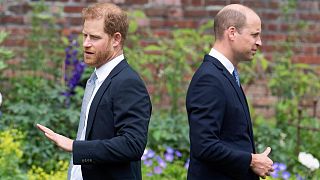 FILE - FILE - Prince Harry, left, and Prince William stand together during the unveiling of a statue they commissioned of their mother Princess Diana, July 2021   -   Copyright  AP
By Euronews  with Reuters  •  Updated: 06/01/2023

A new memoir by Britain's Prince Harry reportedly describes a physical fight he had with his brother Prince William, which left Harry injured, after he says the heir to the throne attacked him and shoved him to the floor.

The Guardian newspaper has obtained an advance copy of Harry's book "Spare" which is due to be published next week, and which apparently makes the astonishing revelations.

Describing a confrontation which took place at his home in Kensington Palace in 2019, Harry says his older brother William called Meghan "difficult", "rude" and "abrasive."

These were accusations also made by some parts of Britain's tabloid press about Harry's wife Meghan Markle, an American actress who he married in 2018.

The new book, the Guardian reports, says that the confrontation escalated to the point where William swore at Harry, and attacked him -- grabbing Harry by the collar, and knocking him to the floor.

Prince Harry says he was frightened by his "furious" brother William, and refused to fight back even though he claims he sustained an injury to his back during the incident.

To drum up publicity ahead of the book's launch, Prince Harry has done two interviews with US and UK broadcasters.

In clips released earlier this week, he said his troubled relationship with the royal family "never needed to be this way" and he wants to get his father King Charles and his brother "back".

"They've shown absolutely no willingness to reconcile," Harry said in the clip. "I would like to get my father back; I would like to have my brother back."

Harry and his wife Meghan, officially known as the Duke and Duchess of Sussex, stepped down from royal duties in March 2020, saying they wanted to forge new lives in the United States away from media harassment.

They have since criticised how they were treated as members of the royal family, including an accusation by Harry that his brother William, Prince of Wales, screamed at him during a meeting to discuss his future.

In a separate interview with CBS News in the United States, Harry said Buckingham Palace had refused to publicly support him and his wife, while at the same time the institution was briefing against them.

"When we're being told for the last six years, 'We can't put a statement out to protect you,' but you do it for other members of the family, there comes a point when silence is betrayal," he told journalist Anderson Cooper.

Both interviews will be broadcast on 8 January, two days before publication of Harry's autobiography titled "Spare".

'We're very much not a racist family,' says Prince William