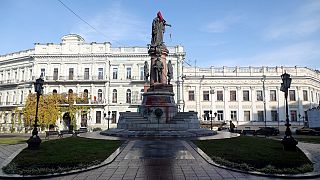 Statue of Empress Catherine the Great of Russia with an executioner's hood on the statue's head and a rope with a noose in it's hand placed by activists, in Odessa.   -  Copyright  OLEKSANDR GIMANOV/AFP
By Katy Dartford  with AP, Reuters  •  Updated: 29/12/2022

A statue of the 18th-century Russian empress Catherine the Great has been removed from the Ukrainian city of Odesa.

The move is part of an effort of “de-Russification” amid Russia's war in Ukraine. It includes pulling down monuments and renaming hundreds of others to honour its own artists, poets, soldiers and independence leaders, including heroes of the war.

The statue which towered over a central square had been vandalised repeatedly since the February 24 invasion of Ukraine.

Catherine the Great is believed to be the founder of Odesa. Her monument was erected in the city centre in 1900 but removed by the Soviet regime in 1920. The city council restored it in 2007.

The statue, which is formally known as the Monument to the Founders of Odesa and features likenesses of several other tsarist-era figures, will be relocated to a temporary storage space and then to a museum.

The decision to dismantle the monument consisting of sculptures of Russian Empress Catherine II and her associates was made recently by Odesa residents by electronic voting.

Who was Catherine the Great?

Catherine the Great, born Princess Sophie Friederike of Anhalt-Zerbst in Stettin in 1729, was empress of Russia from 1762 to 1796 following the overthrow of her husband, Peter III in a coup d’état.

The German-born empress led Russia out of isolation into full participation in the political and cultural life of Europe, carrying on the work begun by Peter the Great, her husband's grandfather.

Inspired by the ideas of the Enlightenment, many new cities, universities, and theatres were founded.

Under her long reign, she reorganised the administration and law of the Russian Empire and extended its territory, adding Crimea and much of Poland.

Along with large-scale immigration from the rest of Europe, Russia became recognised as one of the great powers of Europe.

As is often the case with women who have wielded political power, Catherine has been the victim of accusations of sexual deviance, including nymphomania and bestiality.

Hulu's 2020 series, 'The Great: An occasionally true story' starred Elle Fanning and Nicholas Hoult as Catherine and Peter. It focuses on a plot to kill her husband and characters keep talking about Catherine having sex with a horse - one of the many lewd rumours that were spread about her during her reign.

It portrays the insecurities of Catherine's rule following the 'mysterious' death of Peter and the resentment towards a woman stepping out of her place.

Other statues in Europe that have fallen

A bronze statue of the 17th-century slave trader Edward Colston was toppled into Bristol Harbor in June 2020.

A bust of Belgian King Leopold II was removed by a city worker in Auderghem, near Brussels, also in June 2020. Another statue of Leopold had been removed from a public square in Antwerp three days earlier.

Leopold's forces seized Congo in the late 19th century and ran an exploitative colonial regime that led to the deaths of millions.

Statues of Lenin and other communists were removed shortly after Lithuania's independence in 1991.

But since the start of the war in Ukraine, other sculptures have also disappeared. Statues of Soviet World War II soldiers in Vilnius’ Antakalnis Cemetery were removed in December, despite a UN injunction.

Watch: Statues under attack as Europe confronts colonial past