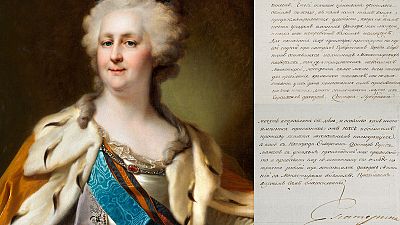 Portrait of the Empress Catherine the Great by Dmitry Levitsky, with her letter to Count Piotr Aleksandrovich Rumiantsev on Vaccination Against Smallpox, 20 April 1787.   -   Copyright  © 2021 MacDougall Arts
By Josephine Joly  with AFP  •  Updated: 19/11/2021

At a time when Russia was being ravaged by a smallpox epidemic, killing tens of thousands in Siberia in 1767, Russian Empress Catherine II was already an early adopter and champion of vaccinations, and probably the first person to make it fashionable.

In a 1787 letter to Count Pyotr Alexandrovich Rumyantsev, Catherine the Great outlines the protocol for a vaccination campaign against smallpox.

"She describes step by step, in stages, how to organise a vaccination campaign in Russia, and slowly, she made it happen," revealed Ekaterina MacDougall, a Russian art expert and co-founder of the auction house MacDougall's.

Her belief in the ideas of the Enlightenment, a philosophical and intellectual movement that swept across Western Europe in the 17th and 18th centuries, and her friendship with French philosopher Voltaire, who had a strong faith in science and progress, greatly influenced Catherine.

After learning about the work of pioneering British physician Thomas Dimsdale, she invited him to her court in 1768, instructing him to vaccinate herself and her son, Paul, to set an example for the Russian people.

"She understands that if she were to force people, to simply write a decree ordering that everyone should go and take this horrible contaminated substance, to make cuts in their arms and put the infection into their blood, of course, it would be scary. People could not be forced to do it officially, by decree," added MacDougall.

Relays of horses were at the ready in case the inoculation should go wrong and Dimsdale needed to escape from Catherine's angry subjects.

The operation was kept secret, and she and her son recovered successfully.

Her court later followed in her footsteps, paving the way for her subjects to witness the efficacy and safety of vaccinations.

"Catherine II prepared the people, she carried out a colossal campaign to establish a vaccination institute in Russia, and of course, in today's conditions, we should be proud of Catherine II," she went on.

After getting the jab, the Tsarina made a point to declare inoculation-sceptics "truly blockheads, ignorant or just wicked".

Her letter is now on display at the Zubovs' estate in Moscow, ahead of an auction at the MacDougall's auction house of Russian art in London, on December 1.

"The letter put up at the auction today is absolutely unique, because Catherine says: 'We need to hire such and such a doctor, to arrange inoculation centres in such and such monastery courtyards, there is no need for hospital beds, it is cheap, it can be done, people need to be convinced, the doctor's salary must be taken from our treasury and budget',"

Other highlights of the auction will include a rare lifetime 'Portrait of Peter I' by J. Kupetsky together with the official Russian-Prussian treaty of 1714, signed personally by Peter I.

The portrait was painted by Kupetsky in 1711 during the Emperor's stay in Torgau on the occasion of the wedding of Tsarevich Alexei to Crown Princess Charlotte Christina Sophia.

Until now, no Moscow museum could boast of a lifetime portrait of Peter.

The exposition will run through from November 19 to the end of the month.