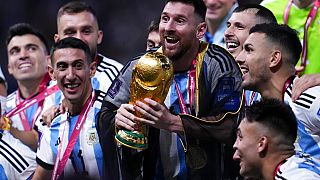 If you did choose to ignore the controversy and watch the football World Cup in Qatar, then there's good chance after a month of matches that some of the tournament's theme tunes are echoing in your head.

A quick trawl through social media will easily demonstrate the strength of songs to celebrate or condemn players generally before, during and after matches.

Arguably the absence of alcohol in Qatar meant there were no ugly scenes of fan violence during the tournament and, from afar there seemed no absence of atmosphere in stadiums.

But will any of the music played induce tears of joy or sadness in the same way that Luciano Pavarotti's rendition of Nessun Dorma helped define Italia '90? It's by far the World Cup that most successfully penetrated hearts and minds with its music.

Before a ball was kicked in anger in Qatar, FIFA released a multi-song soundtrack; the first single wasHayya Hayya (Better Together) by American singer TrinidadCardona, Nigerian artist Davido and Aisha from Qatar.

With lyrics in English, Spanish and other languages. The music video was released on 1st April 2022 and has around 70 million views on YouTube.

The other notably single from FIFA's soundtrack that you may miss without the backdrop of football is Arhbo by Puerto Rican rapper Ozuna and the French-Congolese artist Gims.

The video for Arhbo captured the attention of football and music lovers when it premiered on YouTube and to date has been watched more than 65-million times.

The power of song

Perhaps you thought the 90s dance anthem Freed from Desire was part of the official soundtrack as players and supporters in the stadiums rocked to its infectious beat immediately after many games throughout the competition.

The England team's exploits are synonymous with Three Lions - the song made famous in the 90s by comedians David Baddiel and Frank Skinner along with The Lightning Seeds.

Its memorable lyrics and sing-along chorus have guaranteed its popularity and helped it be heard well outside of England over decades.

Football's loved around the world for the beautiful emotional battles within the game and often there's drama to match it off the pitch.

American YouTuber IShowSpeed went viral this year with his song World Cup which has been viewed more than 50 million times.

He gained notoriety by playing FIFA during his livestreaming which led many to call for his song to be part of the organiser's official soundtrack.