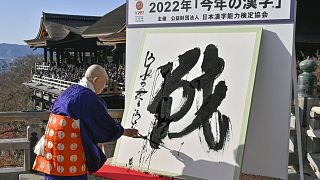 Japan chose the kanji “sen” (戦), meaning war, battle or match, as the kanji – or character – that best symbolizes this year in Japan.

The public votes in the annual event for the written character they think best represents the past year.

Olympic-themed choices dominated 2021, when Japan chose “kin” - meaning gold - as kanji of the year last year in honor of the Tokyo Olympics, which took place after a COVID-19 virus postponement.

The mood was darker this year…

“The invasion of Ukraine by Russia, the shooting of former Prime Minister Abe, and the rapid yen depreciation and inflation faced in daily life have caused anxiety for many people,” the Japan Kanji Aptitude Testing Foundation said in a news release.

The Kyoto-based association promoting the use of kanji announced the result of its annual poll with a calligraphy performance at Kiyomizu Temple in Kyoto City.

War was followed in the rankings by “an,” a character meaning both cheap and safe, with the weak yen and inflation adding to feelings of insecurity. “Raku,” the character for fun and easy, was ranked third, with one voter citing the opening of the Studio Ghibli theme park.

Chief priest Mori Seihan, master of the ancient Kiyomizu Temple in Kyoto, wrote the kanji "sen" on a large sheet of Japanese washi paper with an ink-soaked calligraphy brush.

Mori Seihan said he believes the Russian invasion of Ukraine had left a strong impression. Indeed, the character received 10,804 votes, the most among over 223,000 entries from the public.

This is the second time that the kanji character "sen" has been chosen in the event's history, following 2001, when the September 11 terrorist attacks occurred in the US.