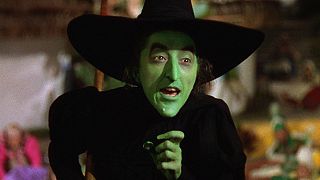 On this day in 1902 in Cleveland, Ohio, was born Margaret Hamilton.

For the heathens amongst you, Hamilton is best known for her iconic turn as Almira Gulch / The Wicked Witch of the West in The Wizard of Oz (1939).

Children were terrified of her and until the day she died (16 May 1985), she had children asking her why she was so mean - the irony being that Hamilton’s first job was a kindergarten teacher.

She appeared in countless films and television sitcoms after her role in The Wizard of Oz, was a Sunday school teacher during the 1950s, and kept an interest in educational issues: she gained recognition for her work as an advocate of causes designed to benefit children and animals.

While we’re dishing out facts, Hamilton was very badly burnt on the set of The Wizard of Oz: she received second and third degree burns as a result of a trapdoor malfunction during her fiery exit from Munchkinland. She had to take over month off to recover.

She also famously signed autographs with “WWW” (Wicked Witch of the West).

1992: At precisely 3.30pm on 9 December 1992, UK Prime Minister John Major got to his feet in the House of Commons and said: “It is announced from Buckingham Palace that, with regret, the Prince and Princess of Wales have decided to separate." The headlines the next day had a field day (see above).

Today is also World Techno Day. The date selected to honour the creation of this musical form is the birthday of one of the founders of the genre. Juan Atkins was born on 9 December 1962, and was part of the Belleville Three, so called because of their time together in Belleville, Michigan, US. The area is recognized as the birthplace of techno.