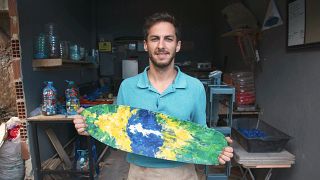 As the sun rises over Rio de Janeiro, a group of young skateboarders thrash and turn through a crosshatch of narrow alleyways. Their skateboards are made from recycled plastic bottle tops, collected, and manufactured within the city's sprawling favela district.

Arian Rayegani, a Canadian engineer, came up with a unique eco-friendly solution to help alleviate the problem of waste in Brazil. He founded Na Laje Designs in 2020 and combined his passion for skateboards and recycling.

"The idea started when I had the goal of recycling my domestic plastic waste, and I started experimenting and finding ways to recycle it. This was more of a hobby," explains Arian. "Once I understood how to recycle, using basic tools and instruments, I wanted to make a useful product," he adds.

Since its inception, his initiative has created more than 100 skateboards using over 50,000 discarded plastic bottle tops. The skateboards are handmade in Arian's workshop in Rocinha, the largest favela in Brazil. Each board is carefully crafted and takes almost three hours to complete.

Arian says each skateboard is unique, and the production process is artistic and artisanal. "The whole process starts when we receive the plastic. We separate them by categories and colour, and we wash them. Once they're washed, we shred them, and then they go to the mould," Arian tells Scenes.

The mould then goes into a large pizza oven, where the shredded plastic melts into the board's shape. After ten minutes, another layer of plastic goes on top. This process must be repeated six to seven times in order to fill the mould.

"We press it together and wait until the mould cools down. We cut the edges so that they are nice and clean. Then we put the trucks and wheels on," Arian explains. "After which, we have a complete skateboard," he adds.

'Our skateboards are made for cruising.'

Skateboarding is popular in Rio de Janeiro, especially among the younger generations. Young people can be spotted performing tricks and jumps using skateboards all over the city. Arian's skateboards, however, are a type of board referred to as a 'cruiser'.

"Our skateboards are made for cruising and going fast on the road. It is not so much for doing tricks," he says. The skateboards come in different sizes to suit all age groups.

Brazil is the world's fourth largest producer of plastic pollution, and much of this pollution accumulates in the country's slums. According to The Brazilian Association of Public Cleaning, more than two million tonnes of discarded plastic end up in the country's rivers and seas every year. This waste material damages the ocean's fragile ecosystem and endangers marine life.

Biologists in Rio de Janeiro studying the presence of plastic in Brazil's coastal waters have found that plastic pollution is worse than they had feared. Marine life extracted from surrounding areas has plastic inside them.

Arian's unique and colourful creations generate income for poverty-stricken communities in Rocinha. His company has joined forces with Familia Na Mesa, an NGO which gives food baskets to 200 needy families in the area every month.

The improper disposal of plastic waste is a severe problem in Brazil. Rio de Janeiro has more garbage than the local authorities can handle on their own. Arian wants to expand his novel venture to neighbouring favelas in the city to help clean up his community.

"We want to be an example for kids and other businesses to show that they can use plastic waste and other residues to have a more circular economy. It also allows people to practise sport and be more active," says Arian. "In Rio de Janeiro, there are many problems, but there are also many solutions," he adds.

Arian's goal is to raise public awareness about the issue of plastic pollution within Brazil's favela districts. He wants to inspire individuals and communities to act, establish environment-friendly habits, and live sustainably.