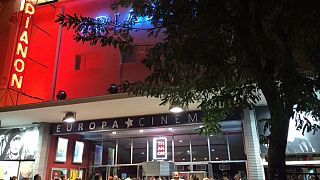 The European Film Academy is celebrating the seventh art in 35 countries across the continent, with its inaugural edition of the Month of European Film.

This new public-facing event consists of a showcase of European cinema, taking place in arthouse theatres and other venues, highlighting the best of European cinema through screenings, special programmes, retrospectives and meetings.

In Greece, the festival is taking place at the Trianon in Athens.

“We are trying to promote the European film industry and all these events aim to achieve this goal. We have organised screenings with Q&A sessions with guest directors as part of this 'European Film Month'," explains Michael Zeis, head of distribution and communication at Le Trianon.

In its varied programme, the Trianon has - among other offerings - chosen to screen the critically acclaimed animated documentary Flee.

Nominated three times at the Oscars, Jonas Poher Rasmussen’s gorgeously bold and impactful film tells the story of Amin Nawabi as he grapples with a painful secret he has kept hidden for 20 years. It’s an emotionally rich and empathetic story with touches on politics, sexuality, hope and the definition of “home”; it rightly won the Grand Prix at the Annecy Animation Film Festival - a reference in the field.

All the films on offer are subtitled in the language of the host country, such as L'événement (Happening), Audrey Diwan’s poignant and socially-resonant Golden Lion-winning film that follows a student who wants to terminate her pregnancy in order to continue with her studies and her life. Only snag is that she lives in France in 1963, when abortion is illegal.

Curious cinephiles can also discover this programme from a distance thanks to the global streaming platform MUBI, which offers a rich selection of European films.

On 10 December, in Reykjavik, Iceland, the European Film Award ceremony will reward the best of European cinema, including the LUX Prize for the public.

The Month of European Film lasts until 10 December.

Here are the winners of the 2022 European Film Awards