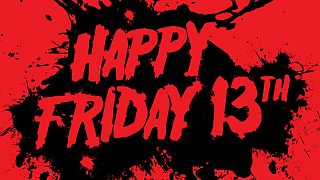 Do you suffer from Friggatriskaidekaphobia, the fear of Friday 13th?

You're not the only one.

It’s one of the most pervasive superstitions in Western culture, alongside crossing a black cat or walking under a ladder.

For instance, an estimated 17 to 21 million people in the United States are actively affected by Friggatriskaidekaphobia – named after Frigga, the Norse goddess after whom ‘Friday’ is named in English – or ‘triskaidekaphobia’, the fear of the number 13.

Some people refuse to fly, or close a business deal on this date, while others refuse to leave the house. Some buildings skip the 13th floor, going from 12 straight to 14, there are dinner guests who refuse to eat at a table with 13 guests, and there are airlines do not have a row 13.

But why is the number and date considered so unlucky?

The origins of Friggatriskaidekaphobia (or paraskevidekatriaphobia in some quarters), as with most superstitions, are tough to pinpoint.

The concept of the cursed number can go back to Norse mythology.

According to Viking myth, 12 gods were having a banquet in Valhalla. A 13th, uninvited guest known as Loki – the god of mischief – arrived, and deceived Hodr, the blind god of darkness, into shooting Balder the Beautiful, the god of joy and gladness, with a mistletoe-tipped arrow.

The superstition then spread south throughout Europe, becoming established by the start of the Christian era.

Then came the story of another dinner party: the Last Supper, which was attended by Jesus Christ and his disciples. The 13th guest was none other than Judas Iscariot, the disciple who betrayed Jesus, leading to his crucifixion on Good Friday.

Going back even further in Biblical tradition, Friday is said to be the day that Adam and Eve ate the forbidden fruit from the Tree of Knowledge, as well as the day Cain murdered his brother, Abel.

Beyond myth and religion, for many the number 13 suffers simply because it comes after the number 12.

Numerologists consider 12 a “complete number”: there are 12 months in the year; 12 hours of the clock; and 12 signs of the Zodiac; 12 labors of Hercules; 12 gods of Olympus… The number 13 is irregular by comparison.

As for Friday, many believe that it has been an unlucky day since the 14th-century publication of Chaucer’s ‘The Canterbury Tales’: “And on a Friday fell all this mischance.”

Fast forward a few millennia and popular culture has not helped in any way: Thomas William Lawson’s 1907 novel 'Friday, the Thirteenth', tells the story of a stockbroker who creates chaos on Wall Street; the German bombing of Buckingham Palace took place on Friday 13 September 1940; the ill-fated Apollo 13 moon mission; the Friday 13th films, with hockey-masked killer Jason Voorhees slashing to his heart’s content…

All have contributed to giving the date a bad rep.

But some countries would disagree.

In Hispanic and Greek culture, Tuesday 13th is traditionally considered an unlucky day.

In Greece, Tuesday is the day associated with Ares the god of war, and Greek name for ‘Tuesday’ is ‘Triti’, or ‘third’, heightening the superstition, since bad luck supposedly comes in groups of three.

Add the fact that Constantinople fell both times on a Tuesday - in 1204 during the Fourth Crusade, and in 1453 to the Ottomans - and you’ve got yourself a cursed day.

In Italy, the number 13 is actually considered lucky, and it’s Friday 17th that has the bad reputation.

The connection between the number 17 and bad luck is goes back to the Roman numerals for 17, XVII. When rearranged, it creates the word VIXI, which translates as “I have lived”, the past tense which implies death.

Consequently, Alitalia, the country's airline, does not feature row 17 on its planes.

Hooray for Pagans and Taylor Swift

Both Fridays and the number 13 haven’t always been unlucky.

Organized religions and misogyny silenced paganism and the celebration of women throughout the centuries, thereby leading to the narrative of Friday 13th as an unlucky date.

In pagan times, Friday was believed to have a unique association with the divine feminine – which loops us back to Friggatriskaidekaphobia. As any discerning mythology expert or Marvel fan will tell you, Frigga was the Queen of Asgard and a powerful sky goddess, one who was associated with love and motherhood and who could prophesize fertility.

Therefore, Friday was considered a lucky day for marriage by Norse and Teutonic people.

Regarding the number 13, it was a harbinger of good fortune for pre-Christian and goddess-worshipping cultures because of its link to the number of lunar and menstrual cycles that occur in a calendar year.

Swift considers 13 her lucky number and, early in her career, often performed with the number written on her hand.

Maybe the legacy of Friday 13th can be rewritten…

After all, it beats trying to pronounce Friggatriskaidekaphobia.

Good luck with that.

The mythical creatures of Europe: Trolls