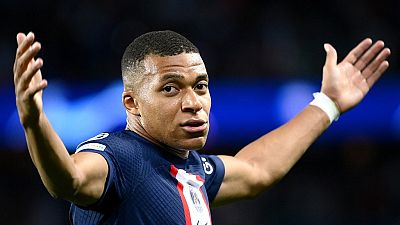 Footballer Kylian Mbappe has brought renewed attention to the social role of sports stars, after refusing to be photographed with the French national team.

According to reports, the 23-year-old striker at Paris Saint-Germain (PSG) said he would not take part in a photoshoot planned for Tuesday with the World Champions until agreements around image rights were "modified."

The footballer sees online betting as a danger to his younger fans and was frustrated at being linked with obesity-fuelling fast food, says the French newspaper Le Parisien.

As Mbappe is widely considered one of the best and most marketable players in the world, the potential financial consequences were huge, especially as there are now only two months to go before France defends its title in Qatar.

So it was no big surprise that a deal was later struck on Tuesday. The striker dropped his stance and too part in the shoot following a statement by the French Football Federation that it would review its decision on image rights.

Yet Mbappe is not the first sports star to wade into politics - and he certainly won't be the last.

In June 2021, Cristiano Ronaldo pushed aside two Coca-Cola bottles from his table during a press conference for the UEFA Euro 2020, asking instead for "water".

The Portuguese captain, an advocate of healthy eating, was visible troubled when he saw the black fizzy drinks laid in front of him, quickly sweeping them out of the camera frame.

Soon afterwards Coca-Cola saw its share price fall by 1.6% and its market value plunged from €241 to €237 billion - a €4bn drop - though this dent was short-lived and the soft drinks giant soon recovered.

Coca-Cola - a sponsor of the cup - said: "everyone is entitled to their drink preferences" with "different tastes and needs."

Just one day after Ronaldo’s move, French footballer Paul Pogba moved a bottle of Heineken beer out of sight ahead of a press conference.

A devout Muslim, the Juventus player hid the bottle of non-alcoholic Heineken 0.0, after he was named man of the match in a 1-0 victory over Germany.

Former English Premier League player Papiss Cisse also once took a stand when he played for Newcastle United and protested against its pay-day loan sponsor because of his religious beliefs.

But this is far from a new phenomenon.

Way back before the age of social media, Muhammad Ali smashed his way to becoming heavyweight boxing champion of the world in 1964, famously declaring "I am the greatest."

The boxer and activist was one of the most famous and recognisable athletes of his day, having become a Muslim and renounced his birth name Cassius Clay as a "slave name."

At the time, the United States was embroiled in the devastating Vietnam War. Ali was drafted into the military, but refused to enlist.

He took a stand based on his religious beliefs and deep ethical opposition to the war.

The conscientious objector was promptly arrested and later found guilty of draft evasion, cementing his status as an icon of the 1960s counterculture generation.

Authorities stripped Ali of his title and had his fighting license suspended.

He did not fight for three years.

It is one of the most famous images in sporting history: two black US athletes on top of a medal platform raising their arms high in the air, fists clenched.

They are Tommie Smith and John Carlos, who came in first and third respectively, in the 200 metre-sprint at the 1968 Mexico City Olympics.

After winning the race, the pair took their medals and stood on the platform for the national anthem. When the Star Spangled Banner began both Carlos and Smith made a "Black Power salute."

They were loudly booed when they left the platform, despite Smith breaking the men's World Record.

Carlos and Smith were protesting the treatment of black Americans and other minorities, during the time of the civil rights movement in the US.

Both athletes were expelled from the games, had their medals taken and were widely criticised for their actions, though the legacy of their protest lives on today.

Mixing politics on and off the pitch

While playing for PSG, Idrissa Gueye skipped a match in May, after players were asked to wear shirts with rainbow numbers to show their support for LGBT+ equality and inclusion.

Gueye missed the game for "personal reasons" according to his then manager Mauricio Pochettino. He also missed the equivalent match the previous season.

The French President Emmanuel Macron criticised the Senegalese player’s actions, tweeting "homophobia, transphobia, biphobia strike, discriminate, reject. Everyone is free to be themselves, to be loved and to love."

In 2021, Ivory Coast footballer Wilfried Zaha declared he would stop taking a knee, becoming one of the first English Premier League players not to participate in the anti-racism gesture.

The Crystal Palace striker instead pledged to “stand tall” when he returns after injury, believing the protest is no longer sufficient.

“I think the meaning behind the whole thing is becoming something that we just do now," he said. "That’s not enough. I’m not going to take the knee.”

Zaha, who said his mother has made him pay 10% of his earnings to charity since he was 16, also suggested that racism black players continue to suffer online suggest the protests were ineffectual.

“We are trying to say we are equal but these things are not working,” he said. “Unless there’s change, don’t ask me about it. Unless action is going to happen I don’t want to hear about it.”

Tokyo Olympics: A sports photographer's take on the 2020 Games