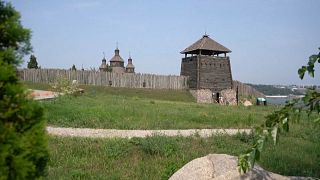 The "Zaporizhzhian Sich" a museum-island in the Dnipro river of around 30 square kilometres that was a base for Ukrainian Cossacks from the 16th century   -   Copyright  AFP
By Rebekah Daunt  with AFP  •  Updated: 03/10/2022

The Ukrainian Culture Minister Oleksandr Tkachenko has accused Russia of what he calls "cultural genocide" in his country.

He says 160 Ukrainian churches and at least two museums have been deliberately targeted by Russian troops simply because they represent Ukraine's distinct cultural identity.

In Kharkiv alone, around 500 buildings are listed as being of historic architectural significance. According to a body documenting damaged heritage sites, most are in the dense historic city centre, on which Russian airstrikes are concentrated.

Across the country, volunteers have joined in a huge effort to remove valued artefacts from locations considered to be under threat of attack as Russia's full-scale attack on Ukraine approaches the seven-month mark.

"For my belief, it's for sure genocide. It's not only about people, I mean human lives and territory. It's also about our identity which represents our cultural heritage, our language, history.

“As soon as Putin and his regime denies the identity of Ukrainians they are trying to ruin everything which is connected to cultural heritage" Oleksandr Tkachenko told Euronews.

To protect and preserve

In a bid to accelerate the rescue mission, Ukraine's Culture Ministry has partnered with Uber.

The US tech giant has developed a custom-built version of its app to transport conservationists to where they're needed.

The company's CEO Dara Khosrowshahi told Euronews that Uber vans have been ferrying teams between evacuation sites and storage free of charge.

"This is about national pride. It's about identity, its history. The Ukrainian culture is a deep culture that deserves to be protected," says Khosrowshahi.

“Obviously, the focus early on, and appropriately so, was on lives and food.

“But Ukrainian history is something that we should all come together to preserve as best we can in this tragic war that's going on", the Uber CEO adds.

In occupied parts of Ukraine, Moscow is trying in various ways to impose Russian language and culture on local populations.

For Ukrainians, the war is not just about lives and territory, it is an existential battle for cultural survival.

Some critics suggest it is futile to document historic buildings in such meticulous detail while the war is still raging and people are dying every day.

But Tetyana Pylyptshuk, the director of the Kharkiv literary museum, begs to differ.

"Culture is the basis of everything. If culture had developed well, people probably wouldn't be dying and there wouldn't be a war," she says.

Pylyptshuk, who also sits on the commission on damaged historical sites, has sent most of her museum collections to western Ukraine to protect them from damage, and, from looting.

"Today, everyone realises this. Maybe they were not so attentive to our cultural heritage before... but when you lose it, it hurts."