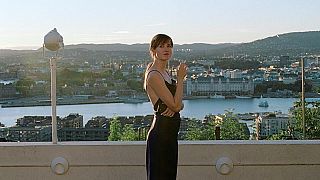 Joachim Trier’s gorgeous coming-of-age film The Worst Person in the World has won Best Film and four other statuettes at Norway’s Amanda Awards last weekend, on the night of Saturday 20 August.

The Amanda Award is given annually at the Norwegian International Film Festival in Haugesund, to promote and improve Norwegian film. The award ceremony marks the start of the festival, which lasts until 27 August.

The Oscar-nominated The Worst Person in the World – which happens to be one of Euronews Culture’s favourite films of the year so far – also nabbed Best Actress for Renate Reinsve; Best Supporting Actor for Anders Danielsen Lie; Best Screenplay by Eskil Vogt and Joachim Trier; and the People’s Choice Award, crowning it the audience’s favourite film of the year.

The film is the third part in Trier’s “Oslo trilogy”, following Reprise and Oslo, August 31st. It’s a romantic whirlwind, both incisively funny and disarmingly self-aware, about how human it is to stumble, and how people collide into each other at the right and wrong times in their lives.

Reinsve is the film’s breakout star. She previously won the Palme d’Or for Best Actress in Cannes last year for her efforts. The actress had been an extra on Joachim Trier’s Oslo, August 31st, in which she had one line of dialogue. The role of Julie in The Worst Person in the World was written for her by Trier, and is Reinsve’s first leading role. She was thinking of quitting acting before she got the call from Trier.

Her performance is at the heart of the story and directly contributes to making it a film of rarities: an honest romantic film syphoned of clichéd rom-com tropes, which features relatably complex emotions and which does not judge its flawed characters.

Trier now holds the distinction of winning the most Amanda Awards, having previously won Best Director for 2007’s Reprise, 2012’s Oslo, August 31st and 2016’s Louder Than Bombs. He also won the Best Screenplay awards for Reprise and Louder Than Bombs (both alongside his regular collaborator Eskil Vogt).

Vogt won the Best Director award at this year’s ceremony for his brilliantly chilling supernatural thriller The Innocents, which follows a group of children revealing their mysterious powers when the adults aren’t looking.

Another key winner of the ceremony was Daniel Kwan and Daniel Scheinert’s sensational Everything Everywhere All At Once, another one of our favourite films of the first half of 2022. It beat Denmark’s entry Flee, the devastating documentary animation film by Jonas Poher Rasmussen, and Dennis Villeneuve’s epic sci-fi blockbuster Dune.

Why did Norway's Queen Sonja visit this church in Minneapolis?