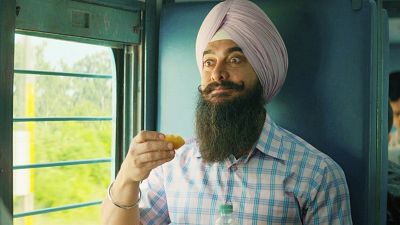 Hollywood is giving The Exorcist a groan-worthy remake / legacy sequel, while Bollywood is looking to revive its fortunes this week with a tantalizing remake of its own…

As a rule of thumb, remakes never outshine the original.

They are highly lucrative studio endeavours but tend to fall flat with film fans, who frequently bemoan the fact that bean counters can’t keep their talons off of classic movies which have stood the test of time, and therefore don’t need an uninspired rehash.

Granted, there no absolutes. Some remakes do offer new perspectives and breathe some fresh air into a story, especially when a director or writer offers their own innovative take on an idea that upends audience expectations.

The majority of the exceptions can be found in horror.

Whether it’s John Carpenter’s paranoia-drenched 80s remake of The Thing, David Cronenberg’s bodyhorror classic The Fly, Luca Guadagnino’s 2018 audacious retelling of Dario Argento’s giallo masterpiece Suspiria, or Leigh Whannell’s impressive Invisible Man, the horror genre is a shining example of how to expand upon themes and avoid tired re-treads. Even if we have to suffer through remakes like 1998’s Psycho and 2010’s Nightmare on Elm Street to get there.

Another name that risks adding itself to this depressing list is the upcoming The Exorcist remake.

Touted for release next year, in order to celebrate the original film’s 50th anniversary, the recent updates regarding the remake reveal there might be plenty to be worried about.

“What an excellent day for an exorcism.”

It was announced late last year that production company Blumhouse, an ever-growing name in the world of horror with hits like Paranormal Activity, Get Out and the aforementioned Invisible Man, had inked a $400 million deal with director David Gordon Green to remake the 1973 classic – and arguably one of the greatest horror films ever made.

Directed by William Friedkin, The Exorcist follows how a mother enlists the help of two priests to save her 12-year-old daughter, Regan, who is possessed by a malevolent entity. The influential cult classic became the first horror film to be nominated for the Academy Award for Best Picture, and in 2010, the US Library of Congress selected the film to be preserved in its National Film Registry, citing it as “culturally and historically significant.”

Big shoes to fill then. But Blumhouse seems to have faith in Gordon Green, who has already remade the Halloween franchise for the studio, with Halloween (2018) and Halloween Kills (2021). The box office numbers are in its favour – the first instalment having grossed more than $250 million worldwide - but the films themselves, while stylish and appropriately gory, pale in comparison to the 1978 original and several of its sequels.

Gordon Green and his co-writers Danny McBride and Scott Teems clearly have a healthy appreciation for Carpenter’s source material, but they still can’t stop the ongoing trilogy from being more filler than killer. Even if we haven’t seen the final chapter, the themes thus far have been handled with a subtlety worthy of its leading man: a 6-year-old mind in the body of lumbering lump.

Blumhouse founder and CEO Jason Blum, who was at Locarno Film Festival this week where he received the Raimondo Rezzinico award for Best Independent Producer, stated that he wants to approach remaking The Exorcist in a similar way to Halloween.

In a recent interview with Variety, Blum revealed that the studio are considering making it a trilogy, and stated his objectives.

“We are getting ready to make it. Hopefully, we will do the same thing with The Exorcist that we did with Halloween – make it in a way that’s fresh and worth revisiting. And feels different enough so that people are happy we did it.

Noble intentions, the only snag being that the new Halloween series feels about as fresh as Regan’s memories of her actual exorcism.

And if they’re following the new Halloween franchise template, 2023’s The Exorcist will be a legacy sequel that will act as a direct sequel to the first film, therefore removing the previous sequels from the narrative continuity.

Legacy sequels are a growing trend in Hollywood: nostalgia-courting follow-ups and loose remakes that usually take place decades after the original film and which often bring back actors from the original.

See: legacy sequels to franchises like The Terminator, Predator and Halloween.

The common denominator? They’re all dross.

So, while suspended judgement is de rigueur and there may yet be the slimmest chance that both Halloween Ends and the as-yet-untitled The Exorcist remake could end up surprising viewers, the Halloween-aping strategy behind the project seems eye-rollingly uninspired.

And if there’s one thing all successful remakes – legacy or no – have in common, it’s not playing it safe and breaking from the established blueprint in an original and worthwhile way.

Not that it’s all doom and gloom.

A ray of sunshine to dispel exorcism fears comes in the shape of an unexpected but promising Bollywood remake.

Indeed, one of India’s most bankable film stars, Aamir Khan, is releasing Laal Singh Chaddha this week, an Indian spin on the 1994 Oscar-winning film Forrest Gump.

The film is released on Thursday (11 August), ahead of India's 75th independence celebrations, and is expected to revive the fortunes of Hindi-language Bollywood, after a string of weak box-office showings. The industry is still recovering from Covid-19 lockdown losses, and many are already predicting Laal Singh Chaddha will be one of India's biggest films of 2022.

The thought of a Forrest Gump adaptation, which reportedly keeps several iconic scenes from the original but changes one iconic line, doesn’t feel like the most groan-inducing idea. And the filmmaking team seem to have a healthy appreciation for the risks involved, the first sign of a promising remake.

"When you adapt a film it's you also adapt it into a philosophy, and that is why it's a freshly written film,” says Atul Kulkarni, the screenwriter of Laal Singh Chaddha.

“I mean, of course it is a take-off from Forrest Gump, but it is completely a new film, a fresh film in every aspect including the philosophy and that line ["My mamma used to say, 'Life is just like a golgappa', your tummy might feel full, but you heart always craves more.'"] is all about. It's a very philosophical line that 'pet bhar jaata hai but mann nahi bhartaa' [in Hindi, which translates in English to 'the stomach gets filled but not the mind'] and it's about the life that his mother is talking about."

Golgappa (or Panipuri) is a popular Indian snack.

The film promises to take people through India's history in the same way Gump stumbled through major US events. And Kulkarni sees the film as a love letter to his country.

"As a person, I am interested in this beautiful country of ours,” he says. “I was always interested in it and that I think has helped me a lot [in writing the screenplay]."

As for leading man Aamir Khan, he admitted that he was uncertain it would be possible to adapt such a “cult classic”.

"It's like saying we are remaking Mughal-e-Azam and Mother India. It's not a wise thing to do," he said, referring to two Indian classics.

"But when I heard the script, I understood he's done it. It was a moving experience for me. I really loved it."

The love is not shared by all, as Indian right-wing critics have already called for a boycott of the film because of comments made by Khan in 2015 about intolerance in the country, comments that were deemed to be unpatriotic.

Here’s hoping a box of golgappa will change their minds.

Or maybe the threat of The Exorcist remake could put things in perspective.

Check out the video above for a full on set interview about the release of the film Laal Singh Chaddha.

How is Disney’s remake of Aladdin good news for the Middle East?