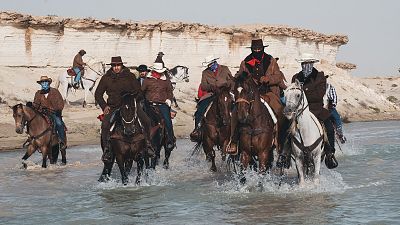 As the sun sets over a desert wilderness, the sound of galloping hooves, cracking whips, and 'yeehaw' resounds across the landscape. These scenes are synonymous with the American midwest, but not the Kingdom of Bahrain.

The island country, situated in the Arabian Gulf has been famed since antiquity for its pearl divers and fishermen. In tasselled waistcoats and leather spurred boots, a group of cowboy enthusiasts tells stories that go back generations.

The group are part of a growing collective of Bahraini men who share a common love and fascination for the Wild West. The subculture meets regularly to practice horse-riding skills, prepare traditional cowboy food and compare outfits.

This unique sport dates back to the 1970s when fathers passed their skills and knowledge to their sons. "The idea came from the generations who started playing this sport before us. We came after them as the middle generation and followed in their steps practising this sport," Bahrain cowboy member Fareed Madan tells Scenes. "This sport continued from the previous to the current generation and hopefully will continue to the next," he adds.

American Cowboys are famous worldwide for their iconic style and rugged lifestyle. Many movies and television shows have been made about their exploits. "I prefer western movies, especially cowboy movies, and my favourite actor is Clint Eastwood. I love the movie "The Good, the Bad and the Ugly. We are following these characters and trying to imitate them in what we do," says Fareed.

The Bahrain enthusiasts get their cowboy costumes from a variety of sources. In the past, they ordered them online directly from American stores. Now, they can purchase merchandise from a local Bahrain retailer specialising in cowboy memorabilia.

"Whenever we put on this outfit, we feel distinguished among people. The feeling is indescribable. If you are passionate about this sport, you'll feel real excitement to be part of it and show your strong and tough side," states cowboy Mahmoud Al Kaffas.

In Bahrain, there are over 300 cowboys. Each cowboy belongs to a stable which has 20 to 30 cowboys as members. "I would like to open my own stable to teach those who might like to join and educate people about it," says cowboy, Fadhel Abbas Al Jabal.

During the cooler months, the close-knit community gather on weekends to take part in festivals, camping trips and reining. "The cowboy sport is like any other equestrian sport, it involves risks and you have to learn the basics of horseback riding. Among the things you need to be aware of before joining this sport is being able to hold the reins with one hand," says cowboy Ali Abdullah.

Reining is an equestrian sport that originates from the manoeuvres needed to work cattle on a ranch. The riders guide their horses through a precise pattern of circles, spins and stops.

"Some competitions require physical strength from the horse and rider alike, such as the barrel game. Here you need to be quick and avoid mistakes in order to achieve the best marks," Fareed explains. "The more mistakes you make and more time you take, you move back in rank. The quicker you fulfil the task with fewer mistakes, you get ahead in the competition."

There are also contests for the best saddle, outfits and prettiest horse. "You feel like a warrior fighting a battle, especially when you enter competitions wearing this outfit. You want to leave a mark in the competition. You don't want to get dressed and participate for nothing. You must be a fighter and achieve the goal you are going after," Fareed states.

Being recognised as an official sport

Sponsors and the members themselves currently fund the competitions and prizes. The group hope that the Bahrain Royal Equestrian and Endurance Federation will recognise cowboy competitions as an official sport.

"In the future, I hope we grow as a group and the number of members increases. Also, to have a track, where we can practice our hobby and get more support for it. Not an association, but rather we aspire to have a union like the Equestrian Federation," states Fareed. "With official support, this sport will grow even more."

The spirit of the brotherhood

The spirit of the cowboy community is key to enticing new members. In recent years the subculture has been growing in popularity. "I can't do anything without the guys' help. We are very close and encourage each other in everything we do,” says Ali. “Being with a group of positive and encouraging brothers is the biggest gift and encouragement for me to continue doing what I love."