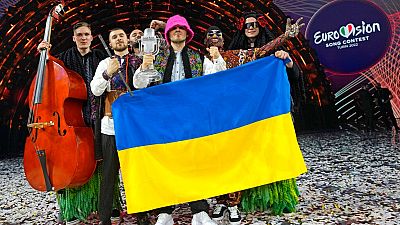 Kalush Orchestra from Ukraine celebrate after winning the Grand Final of the Eurovision Song Contest at Palaolimpico arena, in Turin, Italy, Saturday, May 14, 2022.   -   Copyright  (AP Photo/Luca Bruno)
By Euronews  •  Updated: 03/06/2022

Ukraine's Kalush Orchestra, which won the Eurovision Song Contest earlier this month, has raised $900,000 (€836,000) for their country's military by selling off the trophy they were awarded in Turin.

The group rode a wave of public support to claim an emotional victory with its song ‘Stefania’, which fuses rap with traditional Ukrainian folk music.

The trophy, a large crystal microphone with the Eurovision logo on it, ended up being bought by Whitebit, a company that specialises in trading Bitcoins, during a Facebook live auction.

“You guys are amazing!” the band wrote after the auction had ended.

The group said on Instagram that the money will be donated to the Prytula Foundation, which assists the Ukrainian army, with the funds set to be used to purchase a PD-2 unmanned aerial system, including three drones and a ground control station.

On Sunday the band also appeared at a charity concert held at Berlin’s Brandenburg Gate, with band member Oleh Psiuk appealing to people to not get used to the war.

"I think it should be on the front pages always until peace comes,” he said.

Thousands have died and millions have fled their homes since the conflict began on 24 February.

The proceeds from the Berlin concert will go towards medical care and supplies for hospitals in twelve Ukrainian regions, the Ukrainian embassy in Germany announced.