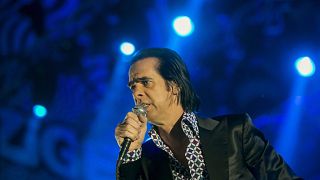 Australian singer Nick Cave of the rock band Nick Cave and the Bad Seeds performs during their concert at the Sziget (Island) Festival.   -   Copyright  Balazs Mohai/AP
By Jonny Walfisz  with AP  •  Updated: 10/05/2022

Nick Cave’s son Jethro Lazenby has died, aged 31. The Australian singer-songwriter confirmed the news on 10 May.

“With much sadness, I can confirm that my son, Jethro, has passed away. We would be grateful for family privacy at this time,” Cave said.

Jethro was the eldest child of Cave’s four sons. Born to Cave and model Beau Lazenby in Melbourne in 1991. Jethro was 10 days older than Cave’s second son Luke, born to his first wife Viviane Carneiro.

Jethro died in Melbourne after he was released from prison last week. More details of his death have not been revealed.

Jethro Lazenby did not meet his famous father, frontman of Nick Cave and the Bad Seeds, until he was around seven or eight.

“To my eternal regret, I didn’t make much contact with Jethro in the early years, but I now have a great relationship with him,” Nick told a journalist in 2008.

Raised mostly by his mother, Beau Lazenby, Jethro went on to become a fashion model, using the name “Jethro Cave”.

After moving to the UK, he modelled for Balenciaga and Versace. He also acted in two films, "Corroboree" and "My Little Princess".

Jethro had been in custody after he assaulted his mother during an argument in her Melbourne home on 7 March. He pleaded guilty to a charge of unlawful assault and for breaching court orders.

He was ordered to undergo substance abuse treatment and avoid contact with his mother for two years. In June, he was due to return to court for sentencing.

Jethro was also imprisoned in 2018 for assaulting a girlfriend. Last month, his lawyer told a magistrate that he had a longstanding diagnosis of schizophrenia.

He was released from a remand prison on strict bail conditions on 5 May.

Jethro is sadly not the first of Cave’s sons to die young. Arthur, one of Cave’s twin sons with Susie Bick died in an accidental fall from a cliff near Brighton, England in 2015, aged 15.

Arthur’s death has been much of the focal point of Cave’s work since 2015. Nick Cave and the Bad Seeds’ sixteenth album, “Skeleton Tree” dealt with feelings of grief and his relationship with Susie.

It was accompanied by a film, “One More Time with Feeling” that documented the creation of the album in the aftermath of Arthur’s death.

The film, a combination of performance and candid interviews, was commissioned by Cave in order to avoid conducting interviews with the media.

Skeleton Tree was followed by two more albums that dealt with themes of grief. “Ghosteen”, released in 2019, explored themes of loss, death and faith. Many of the lyrics of the album came from a metaphysical conversation Cave had with Arthur.

A further album, “Carnage”, recorded with long time Bad Seeds collaborator, Warren Ellis, was released in 2021 and dealt with Cave’s emotions of anger, frustration and also the transcendent joy of parental love.

Cave also became far more open with fans, following the death of Arthur. He started “The Red Hand Files”, a forum where fans can ask him anything and he attempts to answer.

While some answers are firmly part of Cave’s trademark dark humour, he has also taken the time to answer deeper questions with great sincerity.

In 2018, a fan who had just lost her father, sister and lover in recent years asked if Cave felt that Arthur was still communicating with him.

“It seems to me, that if we love, we grieve. That’s the deal. That’s the pact. Grief and love are forever intertwined. Grief is the terrible reminder of the depths of our love and, like love, grief is non-negotiable,” he wrote back.

“Dread grief trails bright phantoms in its wake. These spirits are ideas, essentially. They are our stunned imaginations reawakening after the calamity. Like ideas, these spirits speak of possibility. Follow your ideas, because on the other side of the idea is change and growth and redemption. Create your spirits. Call to them. Will them alive. Speak to them. It is their impossible and ghostly hands that draw us back to the world from which we were jettisoned; better now and unimaginably changed. With love, Nick.”