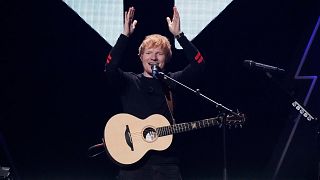 A reworked version of Ed Sheeran’s hit single “2step” with a verse by Ukrainian singer and Antytila frontman Taras Topolia was released this week.

The charity single will donate all its royalties for the next year to Music Saves UA, a non-profit fundraising project to provide immediate humanitarian help to people in Ukraine.

“I decided to explain in the lyrics how it was the first day of the war for me and for millions of Ukrainian people,” the singer-songwriter — and now soldier — told the Associated Press on Tuesday, talking from Ukraine, on the frontline of the war against the Russian invasion.

“The sirens interrupted our sleep, grabbed in two suitcases everything that is in the past, then go!” sings Topolia.

The music video juxtaposes a boy with a slight Sheeran resemblance dancing around a theatre and the journey of a mother and daughter escaping from the war.

For Topolia’s verse, he is filmed leaning against the side of a military vehicle while wearing his medic soldier uniform. The shot was filmed during a patrol with Topolia’s battalion.

“We were doing our job. And driving and between the positions of our battle in the Ukrainian army and just stopped on the road and took the GoPro camera and shot this video. It took maybe 10 or 15 minutes.”

Shooting the scene wasn’t without risk, but Topolio believes the video highlights the “painful and difficult situation” for Ukrainian children.

The boy dancing in the video is Ukrainian dancer Oleksii Sokolov. First he’s dancing in a theatre but the latter parts of the video have his moves continue through battlefields.

To film these segments, Sokolov travelled back to Kyiv from Mariupol.

“Ukraine is not just only destruction and horrible war. Ukraine is also talented, talented people. And those kids that now have no possibility to dance, to sing, to increase their skills, to play in the playgrounds,” Topolia says.

The original 2step video was also filmed in Kyiv before the war began.

“I filmed the video for 2step in the city of Kyiv, Ukraine before the devastating acts of violence started to take place. It was my first time visiting the country and I felt so welcomed during my stay there - everyone from the production crew to the many people i met across my days off. Ukraine is a proud and resilient country and I’m grateful to have had the chance to film my video there. I stand with Ukraine and will be donating my record royalties from YouTube streams of the video to the DEC’s Ukraine Humanitarian Appeal. Ed x” Sheeran writes before the video starts.

Topolia’s band Antytlia got to know Sheeran after connecting on social media before his headline performance at “Concert for Ukraine” in the UK in April.

Fighting in the war has made continuing with music difficult for Topolio.

“I push myself to do something creative because the situation is not so creative. The situation is terrible. But I believe, I know that, what I’m doing now is just collecting the emotions inside,” he says.

“When we will get the victory, all those emotions will be spread by the songs, by the lyrics. And I will share it with all over the world.”

“Emotions of happiness, of fresh start. Emotions of new country, of new future that we will build together united,” he says.