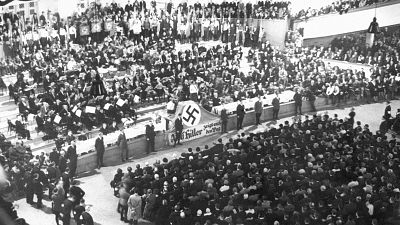 Every year on May 8 we celebrate Victory in Europe Day (VE Day), the end of World War II. But ever since Germany signed the unconditional surrender on May 7, artists and novelists have questioned what the world would be like had the war not ended as it did.

For those who fancy celebrating VE Day in a slightly macabre fashion, here's a rundown of some notable literature and films that consider an alternative version of history.

Probably the most famous alternative history novel, Philip K. Dick’s 'The Man in the High Castle' vividly imagines a world where the Axis powers win World War II and in the 1960s, Japan and Germany are fighting a geopolitical war over a split United States.

Dick’s fictional world, in which the Axis powers are victorious, is rooted in a version of events where Franklin D. Roosevelt is assassinated. The resulting non-interventionism of the US in the war led Germany to conquer Europe and the USSR.

One intriguing feature of the book is that within the story several characters encounter “The Grasshopper Lies Heavy”, a fictional novel about an alternative reality in which Roosevelt survives the assassination attempt and the Allied Forces win the war.

The fascinating 'novel-within-a-novel' is not based on true life events but contains another fictional suggestion altogether.

Ever fascinated by the face of American culture and how it has impacted his youth, Philip Roth also created an alternative history novel where his New Jersey childhood is upset by the election of Charles Lingbergh as president in 1940, instead of Franklin Roosevelt.

Rather than leading the country against the Nazis as Roosevelt did, Roth’s Lindbergh (based on a real person) befriends Hitler and leads the country into a treaty with Nazi Germany.

As the US starts to ebb closer to outward antisemitism, Roth recalls a version of his childhood that’s beset with anxiety and discomfort.

As radio host Walter Winchell attempts to run against Lindbergh’s fascistic presidency, The Plot Against America has episodes of a presidential race that has eerie similarities with phrases Trump used on the campaign trail. Despite Roth writing the book in 2004.

Also good fodder for TV, The Plot Against America became a six-part mini-series in 2018.

While the previous two books considered an alternative ending to the war in the US, the action in Len Deighton’s book unfolds in the UK as it loses.

The novel supposes that in 1940, Nazi forces launched a succesful invasion of Britain. London is captured and King George VI and Winston Churchill become political prisoners. A year later, with Britain under Nazi control, a London detective is set to investigate the murder of a man with links to the British resistance.

Considering what life in Britain would be like under the yoke of the Nazi empire, SS-GB also suggests that a resistance battle would still rage on underground.

Although not officially an alternative history film, Starship Troopers has often been theorised by fans to suggest the Axis powers won World War II.

Set in the 23rd century, humankind is locked in an interstellar war with an insect species called Arachnids. Following a unit in the United Citizen Federation’s Army, the film shows a hostile society where violence is the only virtue. The only way to gain citizenship is through military service and there are suggestions that war is purposely never-ending.

Director Paul Verhoeven has suggested the “American” society that features in the film is directly modelled on the Nazis as “war makes fascists of us all”. In one scene, an advert for joining an army unit has been adapted shot-for-shot from a scene from “Triumph of the Will”, a Nazi propaganda film. And much of the costumes were modelled on Nazi uniforms and imagery.

Also not strictly an alternative history piece, this Finish-German-Australian comedy action film suggests not all the Nazis were defeated in 1945. Instead, a group of Nazis flew to the moon and bided their time before an attempt to reconquer the world with a space fleet in 2018.

The comedic Fourth Reich’s attempt to recapture the world isn’t necessarily everyone’s cup of tea, but it’s definitely one of the wackier attempts to suggest a world where the Axis powers continued on after VE Day.