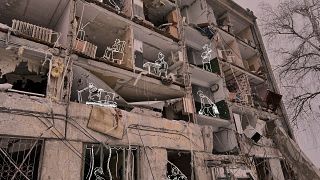 A few days ago, Sasha Anisimova made the perilous journey back to her home in Kharkiv.

The Ukrainian artist hadn’t been back home for over a month since she had to evacuate to a safer place outside of Kyiv.

“We couldn’t sleep in Kharkiv, so we started moving at 6 am to make the one-day trip.” Anisimova explains.

When she arrived home, she was able to pick up extra clothes and trinkets she’d missed. She also made a little bit of time to clean the kitchen where the food left hastily in the refrigerator had started growing mould.

“I wanted to cry. I felt very bad but I also saw my city and was very happy. It was two emotional states but at the same time,” she says.

While momentarily back home, Anisimova also found time to take a photo of her room to use in her latest works of art.

Since the war began, Anisimova has taken photos of Kharkiv in its various states of destruction and added her own touch. On each photo she draws the outlines of people going about their daily business unaffected by war.

In her latest piece, the outline is of her, sitting at her desk in her room in Kharkiv, working as if the Russians had never invaded.

“I drew myself and my dog and my workplace. I want to sit there so much. It’s really hard to understand the situation we’re living in. But this is the one way I can maybe help my country by telling our story.”

Art out of war

It’s a classic example of Anisimova’s current works which developed in the wake of Russia’s invasion. The first and arguably most popular of her works shows a heavily bombed building with the rooms exposed. In each of the rooms, a different outlined character is either watching TV, practicing yoga or just having a smoke.

“It’s a building near my house,” Anisimova explains. “I miss our normal life. And I draw the life we want to come back.”

"But when people see my illustrations, they think more about our lives and what we’ve lost.”

The normality of people’s lives pre-war and how quickly people have adapted to wartime has unsettled Anisimova. Coming to her home in Kharkiv, people were going to get groceries and smoking without panic.

“People feel tired of the situation but they are still living,” she says. It’s the persistence to live that she most wanted to document.

“It’s hard to understand for people who don’t live in Ukraine. In Ukraine, we’re all in this situation. For us, these pictures are a good way to think about our terrible situations and see that maybe next week or next month I will go back to my home and have my everyday routine back.”

The illustrations have taken on a life beyond what Anisimova could expect gaining popularity across Ukraine and outside of it.

To aid in the war effort, she has also started selling t-shirts with her designs on them. Half of the proceeds will be donated to help with the rebuilding of her city of Kharkiv.

But Anisimova is quick to disparage the idea that she is doing anything too great. “There are a lot of doctors working in very horrible workplaces with bombs and fire everyday. They are the heroes.”

Thinking about her country, she comes alive considering the character of the Ukrainian people.

“People in Ukraine are very brave. We know what we need to do. Ukraine is a big country with our own borders and we need to get our cities back,” she says.

“We know where we are going. It’s like a light and we’re going to the light. We want to be better. Ukraine will be better. And if we just stayed sad all of the time, it would be bad for all of us and the Russians would come and kill us all. Sad is for the Russians.”

“I love Kharkiv and I love Ukraine and I will continue to draw and I hope that my drawings will help someone,” she concludes.

Can the weather be weaponised? Where climate data and art meet

'If there is art, life goes on': Kyiv theatre company takes shelter