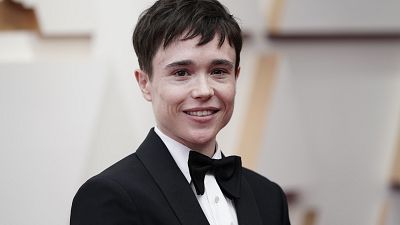 The 90th Academy Awards was a night of historic firsts and a triumph for visibility.

Troy Kotsur became the first deaf man to win an Oscar while the film he starred in ‘CODA’ made history when it won the coveted Best Picture award.

Meanwhile, director Jane Campion became only the third woman to win Best Director, having been nominated in 1994 for ‘The Piano’ but losing to Steven Spielberg for ‘Schindler’s List’.

Before the ceremony even began the red carpet turned rainbow when four women-loving women (wlw) couples arrived at the ceremony.

Comedian and host for the evening Wanda Sykes walked the red carpet with her wife Alex, meanwhile Queen Latifa was seen arm in arm with her partner, choreographer to the stars Eboni Nichols.

Kristen Stewart, nominated in the Best Actress category for her part in ‘Spencer,’ was photographed sharing a cheeky kiss with her girlfriend, the screenwriter Dylan Meyer.

Finally, comedian and TV host Niecy Nash was seen with her wife, the singer-songwriter Jessica Betts. The pair married in 2020, five years after initiating contact on social media.

DeBose was a shoo-in for winning Best Supporting Actress after picking up the prize at both the BAFTAs, Golden Globes and SAG awards so it was no surprise when the ‘West Side Story’ star took home the trophy last night.

DeBose, the first queer woman of colour to pick up the prize, made history with the win and used her speech to reflect on the moment’s significance.

“You see a queer, openly queer woman of color, an Afro Latina who found her strength in life through art and that’s what I believe we’re here to celebrate,” the actress said.

“To anybody who has ever questioned your identity ever, ever, ever, or you find yourself living in the grey spaces, I promise you this: There is indeed a place for us.”

The southeastern state of the US has passed a so-called ‘don’t say gay’ bill which controversially bans referencing homosexuality in schools. The bill has been criticised in political quarters and even protested by school children.

As the audience cheered the three hosts chanted ‘Gay! Gay! Gay!” repeatedly in a repudiation of the homophobic policy.

Elliot Page put in an appearance at the ceremony both on the red carpet and on-stage where he presented the award for best original screenplay.

Page was celebrating the 15th anniversary of his breakout role in ‘Juno,’ and flanked by co-stars JK Simmons and Jenifer Garner, Page praised the film.

It is the first Oscars Page has attended since coming out as trans in 2020, and he sported a dapper, classic tuxedo for the occasion.

“Juno had me hooked from the very first page, it was completely infused with Diablo Cody’s distinctive voice. It was unlike anything I’d ever read before,” the actor said.