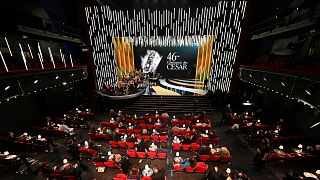 The Cesar nominations were announced on January 26 by the Académie des Arts et Techniques du Cinéma.

France's biggest night in film is due to take place February 25 and will be hosted by Antoine de Caunes.

The vivid drama stars Xavier Dolan and Benjamin Voisin, who broke into the French film scene with coming-of-age feature 'Summer of 85' in 2020, bagging himself his second 'Best Actor' nomination at the age of 25.

Rock-opera 'Annette' has been nominated for 11 awards and also came up trumps at the 2021 Cannes Festival, with director Leos Carax taking home the Best Director award for his English-language debut.

All eyes were on Adam Driver in the US last year for his role in Ridley Scott's 'House of Gucci', but the French Academy has spotlighted him for fronting this project as Henry McHenry, a provocative stand-up comedian.

To complete the ceremony's top three "ones to watch", 'Aline', Valérie Lemercier's biopic dedicated to Céline Dion, won ten nominations. Lemercier wrote, directed, and starred in the film, which received criticisms from Dion's family ahead of its Canadian debut last year.

An opportunity for redemption

For all these films, Cesars could serve as a consolation prize after a year in which French cinema was able to shine at festivals but suffered in cinemas due to the pandemic and the closure of picture houses until May.

Beyond the films, the 47th official ceremony should make people forget the controversies and complications of previous editions.

In 2020, Roman Polanski – who fled to Paris in 1978 after being arrested and charged with drugging and raping a 13-year-old girl – was crowned best director for 'J'accuse', causing the departure of actress Adèle Haenel from the ceremony.

The image has become one of the symbols of the fight against sexual violence and for equality in the cinema world.

Last year's ceremony was marked by the nude on-stage protest of actress Corinne Masiero and low viewing figures of 1.6 million. A decade ago the ceremony could expect to draw in 4 million people.

This year, the organisers are counting on screenwriter and director Danièle Thompson to rejuvenate the spectacle.

But Thompson and his team will have a lot to do as the lack of love for major ceremonies seems to be growing, like the Golden Globes, ousted from American TV.

A fate which the Césars escape until at least 2025 – the expiry date of French premium television channel Canal+'s renewed partnership with the Academy.

Here are the contenders for each key category:

Nominations for categories spanning Sound, Editing, and Cinematography can be found here.

The 47th Cesar ceremony will be held on February 25 at the Olympia and televised via Canal+.