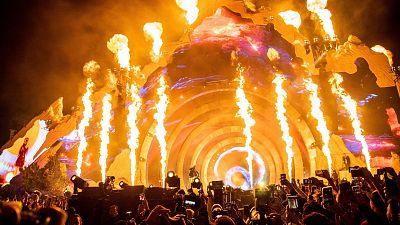 New lawsuits emerge against Travis Scott and the team behind Astroworld every day   -   Copyright  AP Photo
By Shannon McDonagh  •  Updated: 24/11/2021

A lot has happened in the weeks that followed the crowd crush that lead to the deaths of ten young people at Travis Scott's Astroworld Festival.

Over 300 people were treated on site for injuries at the show on November 5.

As the family and friends of deceased and injuries attendees make sense of what happened to their loved ones, new lawsuits are reported on every day, the compensation total ever-rising.

Here is what we know about the legal action taken against Travis Scott over the deaths and injuries at Astroworld.

Lawsuits against Scott amount to billions, not millions

A lawyer based in Texas has filed a lawsuit on behalf of 282 people.

Thomas J. Henry confirmed earlier this month that they would represent attendees, crew, and family members of those affected by the events that took place on `November 5.

Over 120 further people have contacted his firm since to seek representation.

Thomas J. Henry Law is now representing nearly 300 victims of the Travis Scott Astroworld Festival tragedy. If you or a loved one was injured in the Astroworld festival tragedy call 866-340-0555 to speak with an attorney immediately.https://t.co/hucVqyMHv7pic.twitter.com/txY1v6iniY

The figure quickly shot upwards from 68 in the days that followed the disaster. This is not the full extent of legal action taken against the rapper and his team – a comprehensive figure of every lawsuit stretches to an estimated $3 billion (€2.6 billion).

"The defendants stood to make an exorbitant amount of money off of this event, and they still chose to cut corners, cut costs, and put attendees at risk," said Thomas J. Henry

Henry is responsible for a number of successful multi-million dollar cases. Some of the injuries raised with him following the concert include heart attacks, brain injuries and broken bones.

He argues his clients want the defendants to be held responsible for their actions, to "send the message to all performers, event organisers, and promoters that what happened at Astroworld cannot happen again."

Drake, Live Nation and NRG Stadium are also named in the case

Thomas J. Henry will not just be suing Scott for his involvement headlining and arranging the festival.

Live Nation and NRG Stadium have also been implicated on the basis that they promoted, hosted, and organised the event. Further investigations reveal that Live Nation had procedures in place for terror threats and extreme weather, but not crowd surges.

The event's executive producer and festival director, whose names and hierarchy are blocked out in the festival's plan, are the only two individuals with the authority to stop the show, according to the document.

This doesn't comply with the guidelines put forward the crowd safety experts Euronews Culture spoke to in the days following the event.

Fellow rapper Drake – who appeared on stage with Scott for five songs after the alarm was raised – has also been named in the suit. Observers have noted that the pair continued to perform even as an ambulance made its way through the crowd to help injured people.

What has happened at Astroworld is a tragedy that could have been prevented. The fact that @trvisXX and @Drake kept preforming is out of this world and it shows how much they care. Also the fact that the people who were in charge of the camera and mics didn’t do anything…

Drake, real name Aubrey Graham, has come under fire this week for planning to headline another large concert event alongside Kanye West, due to take place almost a month to the date of Astroworld.

Experts suggest lawsuits could be dropped

Some legal experts in the US doubt Scott will be held liable enough for the lawsuits to go through.

A successful lawsuit would have to mean Scott engaged in some form of direct action that incited violence on the night, they say.

"The law requires him to engage in specific conduct that incited the incidents. What did he do at Astroworld that night? That's the question the courts will be asking," says Bryan Sullivan, an LA-based attorney specialising in legal strategy for a number of high profile clients.

Sullivan says Scott will "likely will be dismissed from the case" providing no new and damning information surfaces.

Another high profile attorney, Nick Rozansky, told Yahoo News the financial burden will likely fall on the security company and event promoters like Live Nation and ScoreMore, and to expect "finger pointing."

"It's not uncommon for all of the defendants to start suing each other for identity and contribution if they are found liable," he explained.

Houston police are conducting a separate criminal investigation into what happened at the festival. No one has been charged.

Calls for an independent investigation have been ignored

Calls for an independent investigation into what led to 10 deaths at the Astroworld music festival went unheeded last week, as Houston-area officials instead chose to direct a county administrator to conduct a review with other governmental entities.

County Judge Lina Hidalgo — the top elected official in Harris County, which includes Houston — had proposed a third-party probe of the planning and execution of the festival founded and headlined by rap superstar Travis Scott.

The Harris County administrator instead will work with other city and county entities to review security, fire and other safety plans at the county-owned NRG Park, where the festival was held.

“I hope that it comes back with actionable lessons,” Hidalgo said. “I hope it doesn’t result in something vague or forgotten.”