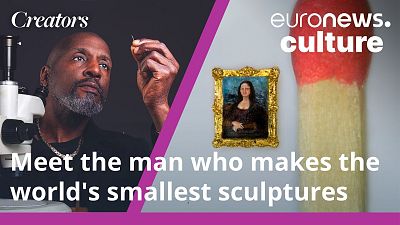 Dr Willard Wigan MBE has made his name as the ‘world’s greatest micro artist’ for his mind-boggling creations that are invisible to the naked eye.

His intricate art can only properly be viewed through a microscope, and is so tiny that it's often displayed inside the eye of a needle, on the head of a pin or even on a human eyelash.

Wigan has achieved two world records for the smallest handmade sculptures. His first record, back in 2013, was for a minuscule 24-carat gold motorbike. He then went on to break his own record in 2017 by sculpting a human embryo from a carpet fibre. According to Guinness World Records, the sculpture measured 0.05388 mm (53.88 microns) wide and was placed inside a hollowed-out strand of Wigan’s own beard hair.

Other examples of his incredible creations include a church carved from a grain of sand and a replica of the Mona Lisa that is smaller than a match head.

Working at such a microscopic level isn't without its challenges:

"Sometimes I find myself in unpleasant situations where a fly may have flown under the microscope and the breeze from the fly's wings may blow one of my sculptures away," says Wigan.

“My artwork drives me crazy,” he admits. “But the glory is when I finish it, when other people see it.”

To achieve such tiny art Wigan has spent years honing his skills and technique.

But this intense creation process can be long and arduous; Wigan can spend weeks working up to 16-17 hours a day on his sculptures.

“Because of my autism, which allows me to have an extremity of intensive behaviour, I'll use that behaviour as a fuel. If I never had this condition, I wouldn't be who I am today," Wigan says.

Wigan’s incredible skills have gained him global recognition, including from Queen Elizabeth II who awarded him with an MBE. In thanks, Willard offered the Queen a minuscule model of her own crown, sitting on the head of a 2mm pin.