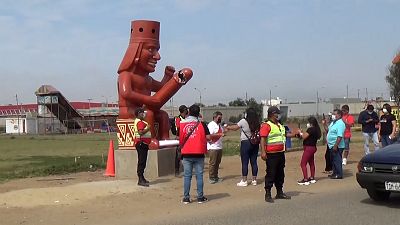 A Peruvian municipality located on the country's Pacific northern coast has caused quite a stir with its latest artistic erection.

The town of Moche erected a monument honoring a pre-Incan culture, known for its proclivity in producing sexually explicit ceramics.

Hoping to bring in tourists, the town added the statue of an indigenous Mochica man with a giant penis, to its list of attractions.

The statue, a replica of a pre-Incan Mochica ceramic, like those usually found in tombs in this region, is made of glass fiber measuring three metres tall and whose phallus measures a whopping 1.5 metres in length.

Experts affirm that members of the Mochica culture known for their extensive irrigation systems for watering their crops in one of the driest places on earth - intertwined sexual activity with the earth's fertility and cultivation of crops.

"Our strength is from what our ancestors from the Mochica culture have left to us," said Mayor of Moche Cesar Fernandez proudly standing next to the statue.

Since being placed next to the highway on January 1, 2022, this northern Peruvian city has seen a marked increase in tourism as hundreds of people take their pictures next to the statue, then share them on social media.