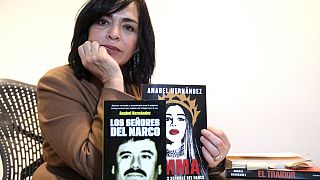 A young mother, a former beauty queen, and the wife of a top drug lord – the resume of Emma Coronel Aispuro could seem rather superficial, but for Mexican journalist and author Anabel Hernández "Narco women are so much more than mafia dolls".

In her latest book 'Emma y las Otras Señoras del Narco' (Emma and the Other Narco Ladies), Hernández describes the role of the wives of drug lords in cartel structures, and especially that of Emma Coronel, the wife of Joaquin 'El Chapo' Guzman, who was sentenced to three years in prison for drug trafficking and money laundering last week.

A specialist in organised crime, Hernández believes that Coronel pleading guilty to the three counts of conspiring to distribute illegal drugs, laundering money and financial dealings with the Sinaloa cartel could be "a breakthrough for other women who get out of this criminal world to confess their stories and break the silence".

"Emma is the first woman from the top of the drug cartels, one of the First Ladies of organised crime in Mexico, who pleads guilty," Hernández said.

Based on the light sentence, the journalist believes that Coronel, who was arrested in February in the United States, could be collaborating with justice.

Something that, according to the writer, "breaks the paradigm" and "puts her in danger".

"If Emma is collaborating with the Department of Justice, she must be providing them with a whole anthropological panorama of how the cartel works. She can also provide very sensitive information that could threaten her life."

Narco wives are often portrayed as naive, perhaps suffering from bad luck, fundamentally innocent, and without any control over their destiny.

But to the Mexican author, these women are much more than that.

Hernández notes that drug lords like Guzman, Rafael Caro Quintero, or Edgar Valdez Villarreal want to have friends "like any human being" but depend on the affection and admiration of their mothers or partners.

"They (the wives) are important because they are the emotional, psychological, affective, sexual support of these men of organised crime," she said.

"We are talking about women who are victims and perpetrators, they are not only sex objects, they (husbands) are also sex objects for them. They also extract, they also get their benefits, they are not just victims."

They arrive as 'victims' but end up as 'victimisers'.

She also points out that the family nucleus of cartels is similar to that of royal or oligarchic families who are linked together to strengthen themselves and where a "violent and grotesque" machismo reigns.

"Women like Coronel learn to move in this world in which they arrive as 'victims' but end up as 'victimisers', enjoying a bloody wealth and educating their children in the criminal system."

Hernández had been in contact with Coronel for two years before the release of her book, and she chose the former beauty queen, 32 years younger than 'El Chapo', as her protagonist because she thinks she is the "prototype of the drug trafficker's wife" who at the same time "breaks the paradigm".

However, after spending more than 15 years picking apart the relationship between drug trafficking and political power investigations, Hernández does not dare to offer a typical profile of the "ladies of the narco", as she assures that they are very different and have faced different circumstances.

Nevertheless, she said that one pattern could be highlighted: most of them have been beauty queens, "even if they are from the smallest town".

"They are such fragile men that they need these women, the most beautiful. They have a huge inferiority complex and they need these titles to strengthen themselves", Hernández concluded.