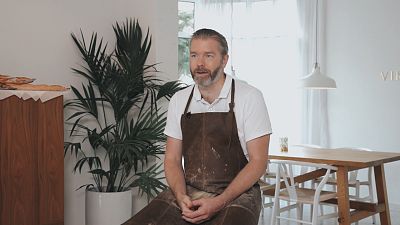 Magnus Ericsson is the founder of Viking Bageri, a bakery changing the bread scene in Dubai. An engineer by trade, Magnus was offered the role of Chief-Operating-Officer by a hospital group in the UAE, and moved to Dubai five and half years ago, together with his family.

When the COVID-19 pandemic started, he found himself in a difficult position as he had to manage his increasing workload and exposure at work, along with the safety of his family at home.

"You become scared, you want to make sure your family is okay, so you isolate yourself. But you also need to have something, which can help to get your focus away from that", he says. Magnus found that ‘something’ in baking.

Growing up in Sweden, he watched his mother bake cinnamon buns and his father bake bread, "but the only thing my dad never made was what I wanted the most; crispy French baguettes", he told Euronews.

Magnus decided to give baking baguettes at home a try and found it therapeutic. He added, "when I baked my first baguette, it was the best feeling because it was very tactile; I could feel the dough going from one stage to another where it was finally working together with me." He also found the result "very rewarding", as just in a few hours, he was holding golden-brown baguettes with crispy crusts and airy centres in his hands.

Having fallen in love with the process and the outcome, Magnus continued baking at every opportunity he found outside his day job, often making 12-15 baguettes a day. "Of course we had a lot of bread, so we started gifting it to our neighbours. Then my German neighbour told me that this baguette was actually the best one he had had in Dubai. That is when I told myself that now I need to perfect it; I need to bake the best baguette in Dubai", he recalls.

At that moment the engineer inside Magnus took over. He measured and changed every ingredient and duration of each step of the process to see what would happen. He kept baking and sharing his bread with his neighbours, who also shared it with their friends; growing a reputation for his baguettes in the town.

Magnus’ wife and co-founder of Viking Bageri, Maria Svedenhov, remembers; "I came home, back from a vacation, and found him baking like a madman. People were calling and chatting with him on Instagram about the bread all the time and I understood we have to do something about this."

Partnering with KRUSH Brands, the couple started Viking Bageri. Customers were ordering the bread almost two months in advance, so they decided to put together a team and move their operations to a bakery. "The community in Dubai was key when it came to us growing rapidly; we did not do any advertising, it was all word of mouth", Magnus says.

The couple has been following the same community-based approach ever since. They hosted a gathering at their house to bake 21 different flavours of baguettes, as requested by their customers, to let them try them all. Today, four of those flavours are already offered by Viking Bageri and more are in the making.

As Magnus continues to explore new techniques and tastes for his baguettes, the couple are looking forward to growing Viking Bageri into an international business. Magnus says "Dubai has a large expat community with people from all over the world. So if you have a concept successful in the Dubai community, it means you can export it to anywhere else in the world."