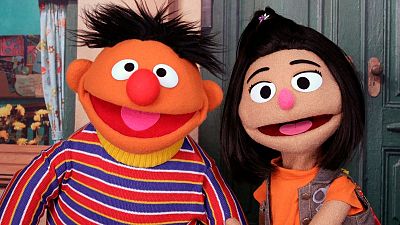 Joining old-timers Elmo, the Count and Big Bird, Korean-American Ji-Young is set to be introduced in a special Thanksgiving episode on November 25th.

The 7-year-old puppet's name is a traditional two-syllable Korean name with Ji meaning smart or wise and Young meaning courageous or strong. In a twist of fate, the name also means ‘sesame’ in Korean.

A lot of Ji-Young’s personality will come from her puppeteer, Kathleen Kim.

“I feel like I have a lot of weight that maybe I'm putting on myself to teach these lessons and to be this representative that I did not have as a kid," said Kim.

The introduction of Ji-Young to Sesame Street is the result of much discussion at the show after events in 2020, including the death of George Floyd and a rise in anti-Asian hate crime during the COVID pandemic.

Sesame Workshop established two task forces — one to look at its content and another to look at its own diversity. What developed was Coming Together, a multi-year initiative addressing how to talk to children about race, ethnicity and culture.

Eight-year-old Tamir, while not the first black puppet on the street, was introduced earlier this year to start difficult conversations about racism.

"When we knew we were going to be doing this work that was going to focus on the Asian and Pacific Islanders experience, we of course knew we needed to create an Asian muppet as well," says Kay Wilson Stallings, executive vice-president for creative and production at Sesame Workshop.

Bert and Ernie’s new neighbours have been crafted at top speed, cutting a usually years long process down to a few months with the help of experts and a cross-section of employees. For Kim it was important for Ji-Young not to be a stereotype.

"Because that's something that all Asian Americans have experienced. They kind of want to lump us into this monolithic 'Asian,'" Kim said. "So it was very important that she was specifically Korean American, not just like, generically Korean, but she was born here."

Ji-Young is projected to be an “upstander” - someone who points out when things are wrong or when someone makes a negative assumption based on the colour of someone else’s skin.

"We want our audience to understand they can be upstanders,” says Stallings.