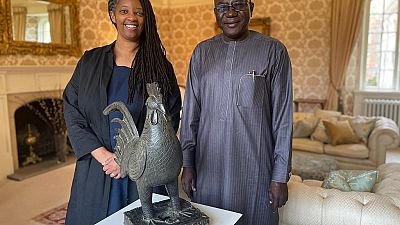 Master of Jesus College Sonita Alleyne and Director-General of the National Commission for Museums and Monuments of Nigeria, Abba Isa Tijani with the "Okukor".   -   Copyright  AFP PHOTO / UNIVERSITY OF CAMBRIDGE   -
By Josephine Joly  with AFP  •  Updated: 28/10/2021

The master of a Cambridge University college handed a bronze statue looted in the 19th century back to Nigerian officials on Wednesday, in the first such move by a UK institution.

The statue, known as the 'Okukur', was taken along with hundreds of sacred sculptures and carvings known as the Benin Bronzes by British colonial forces in the former kingdom of Benin in 1897.

It was given to Jesus College, University of Cambridge, in 1905 by the father of a student.

Sonita Alleyne, the head of Jesus College, gave the elaborately carved cockerel to a Nigerian delegation after students campaigned in 2019 for it to be returned.

Alleyne described the return of the looted artefact as a "really historic occasion".

The college is the first UK institution to hand back a Benin bronze, raising pressure on other establishments, including the British Museum, to follow suit.

"We are proud to be the first institution to simply act," said Alleyne, as she formally transferred the cockerel's ownership. "It's the right thing to do."

"We are delighted that it is now with its rightful owner. It is of cultural and spiritual significance to the people of Nigeria. It's part of their ancestral heritage," she added.

The Benin Bronzes are held in collections of several British, European, and US museums and institutions.

The British Museum, which has the largest collection, has not agreed to return its bronzes, arguing that they are best housed with explanatory notices in purpose-built premises.

The museum has also been criticised for keeping the Elgin Marbles taken from the Parthenon in Athens.

Nigeria's ambassador to the UK, Sarafa Tunji Isola, and Prince Aghatise Erediauwa, the brother of the historic kingdom's traditional ruler, have both welcomed the initiative and thanked Jesus College for righting this wrong.

"I thank you for this wonderful initiative. The people of Nigeria are grateful," the ambassador said, passing on the thanks of Nigerian President Muhammadu Buhari.

"Jesus College is indeed challenging the erroneous arguments that stolen art cannot be returned because of the existence of different legal jurisdictions on the matter," Erediauwa went on.

The cockerel used to be displayed in Jesus College's dining hall, but it was removed in 2016 following the rise of the 'Black Lives Matter' movement.

Abba Isa Tijani, the director-general of the Nigerian National Commission for Museums and Monuments, hailed the college's act as "a great example for other institutions and other countries".

He urged the British Museum to change its stance on the Benin bronzes in its collection and noted that Nigeria has handed over a formal request for their repatriation.

Tijani insisted that the sculptures would be properly "looked after".

Several other Western institutions have announced they will return looted African treasures back to their original countries.

The Quai Branly museum in Paris is exhibiting over a dozen colonial-era treasures for a final time this week before they are handed back to Benin next month.

The landmark move by French President Emmanuel Macron aims to improve his country's image in Africa, especially among young people.

The University of Aberdeen has announced it will also hand another Benin Bronze over to the same Nigerian delegation on Thursday.