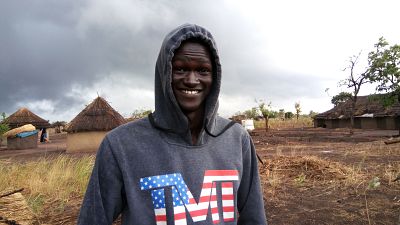 Lual Mayen was 12 years old when he saw a computer for the first time. Standing in a queue at a UN registration centre in a refugee camp in Northern Uganda, he was fascinated by the device and thought it must have fallen from heaven. He pleaded with his mother for one, but she could barely afford enough food to feed her family, how could she possibly buy a laptop.

In 1993, Lual’s family fled their home in war-torn South Sudan during the country’s decades-long civil war. Amidst the chaos, his parents were separated. Lual’s mother, Nyantet Daruka, single-handedly trekked 250 miles to refuge with her children and gave birth to Lual on the way. He was two years old when he met his father for the first time after the family finally found each other.

Working as a seamstress in the camp, Nyantet secretly saved her income for years, to give her son 300 dollars to buy a laptop. Lual cried when he received his gift. “​​I did not have a lot of opportunities until my mother invested in me, ​​she saw something in me,” he told Scenes.

The day that changed Lual’s life

Lual was determined to not waste his mother’s sacrifice. For three years, he walked three hours every day, to an internet cafe to charge his laptop and three hours back. Through online tutorials, he taught himself English, how to code and design programmes.

“Growing up, we had no access to clean water, food, things that are really necessary for people, we were just struggling with life,” Lual explains. “And for me, there’s this human talent that’s always in us and that talent doesn't just go away because we have no resources, or stops us from finding a way we can create something of ourselves,” he added.

When Lual first began making games, he wanted something that the children could play in the refugee camp. And in August 2016, he designed his first game, ‘Salaam’, the Arabic word for peace. The game involved players tapping on bombs that fell from the sky to stop them from blowing up a village below. With no internet in camp, it was only 12 MB/s in size, so it could be shared from mobile to mobile via Bluetooth. Lual posted his game on Facebook and it went viral. He was soon invited to speak at gaming conferences across the world and put in contact with industry professionals. The success of his game launched his career and brought him to America.

Now 27-years-old, Lual lives in a trendy neighbourhood in Washington DC and is the CEO of Junub Games. “Junub is an Arabic word that means people of the South because I'm from South Sudan. I have to create something in the game industry that relates to my people,” he said.

Junub Games focuses on creating mobile games that are aimed at peacebuilding and conflict resolution. Later this year, Lual will be releasing a new version of Salaam, where he will put the player in the shoes of a refugee.

“I wish we lived in a world where we don't have to teach empathy but that's why I created my game. It's a game that is more than about just being a refugee, it's about (understanding) the journey that they have been through,” he stated.

A game for peace

Salaam is a high tension runner game, where the main character is a refugee woman, based on his mother. The goal is to take Nyantet from a war-torn country to a place of peace. Along the way, the player must avoid falling bombs, find water and earn energy points to keep her alive.

Junub Games has teamed up with various NGOs so that when the player makes in-app purchases of food, water and medicine for their character, they are actually buying resources for someone living in a refugee camp. “It’s the first game to bridge the virtual and the reality on the ground,” he explained.

In 2021, Lual founded the Lual Mayen Foundation to empower refugees through technology. In July this year, the international gaming company, Unity Technologies donated 50,000 dollars to fund a tech centre in the refugee camp Lual grew up in. Working in conjunction with Uganda's Ministry of Education, the centre will provide programmes to enable refugees to gain employment in the technology and computer engineering industries.

“One thing I always say is talent is evenly distributed and opportunities are not. I wouldn't be where I am today if my mother didn't give me something that actually changed my life and I want to pay for it,” Lual said.